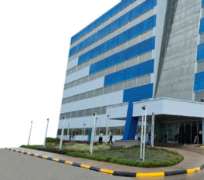 The Management of oil and gas logistics giant, INTELS Nigeria Limited has taken its community support a notch higher by offering full scholarships to no fewer than 66 physically challenged persons.

The scholarship scheme, which was set up in 2003 to assist persons with physical disabilities including polio, covers primary, secondary and tertiary education.

Some of the beneficiaries enjoyed the scholarship from primary school through to tertiary education, attaining professional qualifications in various fields of endeavours including Economics and Law, among others.

The beneficiaries also have the opportunity of working at INTELS after completing their education if they so desire.

One of the beneficiaries, Angela Goni, who is an Economics graduate of the University of Port Harcourt, said “words cannot capture the good works INTELS is doing”.

According to her, “INTELS has changed my life for good. What INTELS is doing cannot be quantified. The company has been able to make me achieve the desires of my heart. They have empowered me and made me independent. Thanks to INTELS I am not on the road begging for money or food to eat. No company in Nigeria has ever done what INTELS has done for the physically challenged. They don’t just stop at granting scholarships, they empower you for all your life. Some of us wouldn’t have been able to go to school at all and make meaning out of our lives without INTELS.”

Another beneficiary of the scholarship scheme, Philip Brown, said, “I have said and will always say that through this scholarship scheme that has been going on for several years, most of us with disability can make it in life. INTELS has given us hope. It is not just the scholarship; they are the only ones that also provide employment without discrimination. Today, I am married and happy because of the support, hope and empowerment given to me and others by INTELS.”

INTELS has won several awards and commendation for its exemplary community development and empowerment programmes.

Recently, the company was honoured by the Nigerian Shippers’ Council (NSC) – an agency of government under the Federal Ministry of Transportation – for its outstanding contribution to the development of its host communities.

NSC conferred the “Most Outstanding Terminal Operator in Corporate Social Responsibility” award on INTELS. The Executive Secretary of NSC, Mr. Hassan Bello, also commended INTELS for its huge investment and commitment to ports development in the country.

Also, the Paramount Ruler of Onne Clan in Rivers State, King John Dennis Osaronu, recently commended the company, describing it as “a company Nigerians must be proud of”.

He said INTELS has provided roads, drainages, streetlights, medical services, ultramodern markets and several other amenities to the community. He also commended INTELS for empowering women and youth in the community.