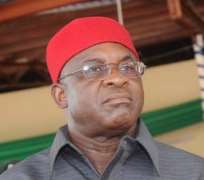 The Economic and Financial Crimes Commission on Thursday picked up former Senate President David Mark for interrogation over allegedly billions stolen by him and other leaders of the National Assembly during his tenure.

Mark, who enjoyed one of the most peaceful Senate Presidency of the nation’s history, according to EFCC sources,   was invited to make statements to the commission on how several billions meant for projects at the national assembly were shared between him and a few others. He was released to go home after the interrogation, expected is to return after the holidays.

A top source in the commission was cited in a report by The Independent as saying,  “We invited the ex-Senate President for interaction on some financial issues and he came to clarify certain aspects relating to him.

“He spent a few hours with us, made a statement and he was granted an administrative bail.”

He added,  “It is too early to release the details but  we did not detain him.

“As soon as we get to a convenient bend, we will tell Nigerians why we quizzed Mark.

“He was implicated in some transactions and we decided to hear from him. This does not mean that he is guilty of any infractions at this stage.

”I  think it is obvious that our detectives will still interrogate him again on the next few days or weeks.”