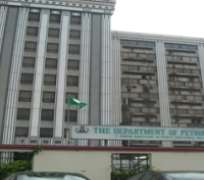 The Senate Committee on Petroleum (Upstream) on Thursday rejected Department of Petroleum Resources' (DPR) proposal of N355 million for foreign trips in the 2018 fiscal year.

The committee rejected the proposal when the officials of DPR appeared before it to defend the department's 2018 budget.

Chairman of the committee, Sen. Tayo Alasoadura, vowed that the committee would reduce the estimates when sending it to plenary for approval.

He said, “ your proposed figure for foreign trips in the 2018 fiscal year is too high and must be drastically reduced before it is presented to the senate for approval.

“Even the N60.2 million proposed for local trips in terms of monitoring is also on the high side and may also be reviewed downward.”

Also, the committee chairman observed that the renovation of DPR Head Office in Victoria Island, Lagos, already rolled over to 2018 was becoming a reoccurring decimal in the agency's yearly budgetary proposals.

“You must finish this project latest June, next year as you have just pledged,'' he said.

Alasoadura further tasked the agency to fast-track execution of the project on upgrading of National Production Monitoring System to save Nigerians who were being cheated by petroleum marketers on daily basis.

DPR Director, Mr Mordecai Baba, had in his defence of the 2018 budget of the agency, stated that N60 million had been proposed for local lp N355 million as part of overhead cost.

He also stated that N50 million had been earmarked for advertisement, N19 million for courier services, N102 million for consulting services and N2.5 million for recruitment.

Baba explained that proposal for promotion was put at N14.6 million, fuelling and lubricant for generators would amount to N182m and utilities would cost N92.8 million. (NAN)