Female Corps member's murder: ' I tricked her into a bush, raped her and straggled her' 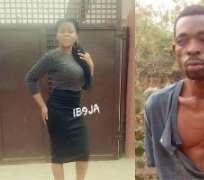 A driving instructor, Festus Udoh, has narrated how he lured a 23-year-old National Youth Service Corps member, Miss Modupe Kawose, into a bush at Mawuko, in the Odeda Local Government Area of Ogun State.

He said he raped and strangled her in the bush.
Kawose had registered in a driving school, Lizzy Driving School, while the suspect worked with the outfit.

The suspect was paraded at the scene of the crime on Thursday by the Ogun State Commissioner of Police, Iliyasu Ahmed.

Udoh said the victim called her on Saturday, demanding her learner's permit, and he told her to join him at Lafenwa in Abeokuta.

The suspect said when the victim arrived, he told her that he had resigned from Lizzy Driving School, and that she should follow him to the place where the learner's permit would be processed.

He said, “We boarded a vehicle and later took a motorcycle to Iberokodo. We alighted at a junction near the bush.

“She was surprised and she asked, 'is this where you live?'

“I said yes, and as we entered the bush, I told her that I wanted to have sex with her, she said no.

“I dragged her into the bush and raped her. Afterwards, she told me that she would report me to her family. It was at this stage that I tore her clothes and used them to strangle her.”

The state police boss said the command's operatives commenced investigation when it received a 'missing person' letter from the state coordinator of the NYSC, Mr John Okoh.

He said, “At the end, we nabbed Udoh.”
He said the victim's relations had been contacted.

This article was first published in The Punch