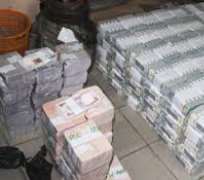 The Federal Government has finally settled  the Ikoyi whistleblower, who provided information leading to the discovery of $43.5 million, £27,800 and N23.2 million at No. 16 Osborne Road, Ikoyi, Lagos.

According to a Vanguard report, the sum of  N421 million to was paid to the beneficiary by officials of the Ministry of Finance.

The newspaper further reported that the beneficiary  left Nigeria immediately for an undisclosed country.

The report indicates that the  eventual recipient of the reward money was the person who had earlier been taken to Yaba Psychiatric Hospital, Lagos, by the Economic and Financial Crimes Commission, EFCC, on the suspicion that he could be mad.

However, what government paid in line with the Whistle-blower Policy which recommended 2-5 percent of any amount recovered for a whisttleblower, was not the total amount due the Ikoyi whistle-blower. When the next tranche would be paid could not be confirmed by Vanguard.

The whistle-blower's lawyer, Mr. Yakubu Galadima, had in November, dismissed reports that his client would receive N350 million reward, saying the actual figure was N850 million.

Galadima, however, told Vanguard on Thursday that payment of the reward to his client had confirmed his insistence that he was the true whistle-blower, adding that the development is expected to put an end to any doubt over who actually blew the whistle.

His words: “My client has been paid. He was paid yesterday and has since left the country. As we are speaking, he is not in Nigeria.”

Vanguard recalls that the issue had been enmeshed in controversy over the treatment meted out to the principal whistle-blower by the EFCC.

The whistleblower was forced to cry out, following claims by the EFCC Chairman, Mr. Ibrahim Magu, at the 7th session of the Conference of State Parties to the United Nations Convention against corruption that he had become a millionaire.

On the heels of that were claims by two other men that they were instrumental to the discovery of the money. A legal firm which claimed to be representing the Whistle-blower, and two others, Abdulmumin Musa and Bala Usman, had petitioned Attorney-General of the Federation, AGF, Abubakar Malami, to pay the money to the three men. In the peak of the controversy, the whistle-blower, narrated exclusively to Vanguard how he made the discovery.

While these lasted, the government insisted that it would only reward the person who provided information that led to the discovery of the fund at the end of last month. The government had in 2016, approved a policy on whistle-blowing that aimed at encouraging Nigerians to report financial crimes.

Minister of Finance, Kemi Adeosun, who announced the policy, said anyone who provided information leading to the recovery of fund, would be entitled to not more than five percent of the recovered sum.