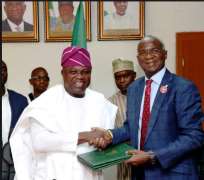 · Says asset will be turned into National Monument, Tourist Centre

The administration of President Muhammadu Buhari, on Tuesday further improved its rating as one that keeps its promises as the Federal Government signed and exchanged the documents that finally vests the ownership of the historic Presidential Lodge on the Marina in Central Lagos to the Lagos State Government almost two decades after the process began.

In a brief but impressive ceremony at the Conference Hall of the Ministry of Power Works and Housing, the Minister, Mr. Babatunde Fashola SAN, said the event was taking place in fulfilment of the promise made by President Muhammadu Buhari at inception adding that the formal handover had brought to an end a journey that had lasted almost two decades.

Reiterating that successive Governments of Lagos State had made strong representations to the Federal Government for the handover of the asset and others like it to the State, Fashola added, “This is a long journey that has come to an end. It is a journey that has taken almost two decades during which the Lagos State Government has asked that the ownership of this property be vested in it”.

The Minister, who noted that events in the past had made it seem as if the handover would not happen, declared, “But the President of Change, the Promise Keeper, has made it possible”, adding that while the Lagos State Government has already taken possession, the event of the day was to formally sign and hand over documents that would establish the rights of the State Government to the ownership of the property.

Congratulating the State Government on the occasion, Fashola, who also congratulated Governor Akinwumni Ambode for the 2018 Trillion Budget which he recently presented to the State House of Assembly, said the event was “consistent with President Buhari’s promise to respond to those many other things that had been left undone”.

The Minister, who named such things that had been left undone to include the Bodo-Bonny Bridge, that waited for over 20 years and the Mambilla Hydro Power Project added that like Bodo and Bonny which has brought hope to the people of Bonny” and the Mambilla Power Project to the people of Taraba, Lagos State had become a beneficiary of ä promise kept”.

Responding, Governor Ambode acknowledged the spirited efforts made by the Minister, who was his immediate predecessor in Government, when he was Governor of the State, to get the ownership of the property back to Lagos adding that the State Government’s intention was to turn the asset to a National Monument as National Centre for Leadership and also a Tourist Centre.

Expressing delight at “this historic day”, Ambode, who was accompanied by some members of his Cabinet, added, “This day actually finalizes the intention of Mr President to actually bring positive change to Lagos. We want to sincerely appreciate Mr. President, Muhammadu Buhari who has graciously approved that the Presidential Lodge be released to Lagos State”. The Governor also expressed appreciation to the Vice President, Prof. Yemi Osinbajo and the Chief of Staff to the President, Mallam Abba Kyari as well as everyone that played a role towards the realisation of the handover.

“We have been trying to get this particular asset back to Lagos, just like the Minister had said, for the last 20 years”, the Governor said, describing it as both delightful and significant that “on this particular day, it is my Predecessor, and now the Minister of Power Works and Housing, who is now actually doing the final handing over of the property for which he, as Governor, fought hard to get back to Lagos State”.

Also describing as, “actually gratifying” that the Minister was the one “positioned to happily do the documentation and handing over of the asset to Lagos State”, Ambode said it was “a sign of greater things and greater collaborations between Lagos State and the Federal Government”, adding, “We believe strongly that this singular gesture will improve the economy of not only Lagos State but that of the whole country”.

Also present at the event were the Minister of State, Hon Mustapha Baba Shehuri, the Permanent Secretary Works and Housing, represented by the Director Finance and Accounts, Mr Ibrahim Tumsah, the Director Highways (Planning and Development), Engineer Uzo Chukwunwike , Director, Human Resources, Mrs Motunrayo Alimi, Director, Legal Services, Mrs Justina Shuwa, other Directors, Special advisers and other top functionaries in the Ministry as well as members of the Lagos State Executive Council such as the Secretary to the State Government, Mr Tunji Bello and Commissioner for Information and Strategy, Mr Steve Ayorinde among others.