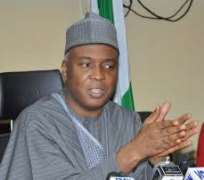 The Court of Appeal, Abuja Division has dismissed 15 out of 18 counts false assets declaration charges brought against the Senate President, Dr. Bukola Saraki, by the Federal Government for being incompetent in the face of the law.

The court, however, remitted three count charges to the Code of Conduct Tribunal to conduct a retrial of Saraki so as to enable him defend himself properly on the charges.

The appellate court in the appeal filed by the federal government against the decision of the code of conduct tribunal which discharged and acquitted the senate president on the 18 count charge in a ruling on no case submission delivered in June this year said that Saraki has to make some explanations on the three counts only.

Justice Tinuade Akomolafe-Wilson in the 70-page unanimous judgment held that there was no evidence to substantiate the 15 out of the 18 counts as valid charges.

The judge however held that on counts 4,5 and 6 bothering on the purchase of house 17 A and B at McDonald Street, Ikoyi Lagos by the Senate president, the prosecution was able to establish a prima facie case against Saraki.

Specifically the appellate court held that the prosecution established that there were discrepancies in the claims on the asset declaration forms as to how the two houses in Ikoyi were acquired.

The Appeal Court held that the senate president needs to provide explanations to the discrepancies established by the prosecution that the properties he claimed were bought from sales of rice and sugar in his asset declaration form were bought from loans acquired from a commercial bank.

The court concluded that credible evidence was led by the prosecution on counts 4,5,6 to warrant the defendant to be called upon to defend himself on how he acquired the properties disclosed in the three counts.

Justice Akomolafe-Wilson said that from the totality of the evidence adduced at the tribunal, it was proved beyond reasonable doubt that the 15 counts knocked off were based on hearsay evidence that have no probate value.

The court further held that the information supplied in the report used to prepare the charge by the federal government against Saraki did not link Saraki directly with the charges as required by law.

The appellate court held that the federal government erroneously came to the conclusion that the onus to prove the 15 charges was on Saraki whereas it is an established fact that the party that alleges must be the one to prove beyond reasonable doubt.

The court faulted the federal government on the claim that Saraki collected salaries and emoluments from Kwara State government after he had left office as the executive governor of the state adding that it was a big surprise that no single witness was invited from Kwara State to prove the allegation.

The court also took swipe at the prosecution on the allegation that Saraki operated foreign account while he was in office as a state governor but called no witness to establish the allegation in line with section 37 of the Evidence Act.

In the 15 count charges that were dismissed, the court held that they were substantially based on hearsay that does not drive value from merit adding that in a criminal trial, evidence base on hearsay is inadmissible in law.