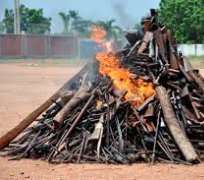 The Presidential Committee on Small Arms and Light Weapons (PRESCOM) has disclosed that Nigerian government has finalised plans to destroy over 5000 illicit weapons recovered in Zamfara State, North West of the country.

The Programmes Coordinator of PRESCOM, Mr. Dickson Orji, disclosed this in Abuja on Tuesday at the ongoing workshop on the "Physical Security and Stockpile Management-PSSM" organised in collaboration with the United Nations Regional Centre for Peace and Disarmament in Africa (UNREC).

Orji who represented the Chairman of the Committee, Amb. Emmanuel Imohe, also revealed that about 425 weapons were also recovered from criminals and destroyed in Katsina State, while Benue State had over 600 weapons destroyed.

He however, listed some of the things that impedes the work of the Committee including the legislative approval to turn it into a Commission and repeal of the Firearms Law of 1958.

“So, it is a continuous process of destruction. We cannot for now say that any state is endemic, because we are still expecting a report of our survey. All the geo-political regions and the states do not have the same problem."

“The survey was conducted in the 36 states and we are collating the report. This workshop is to review the proposed standard operating and administrative procedures on stockpile management and physical security. What we mean is that we have many illicit arms in circulation but some of them are already in governemnt’s stockpile. We believe that if the government manages its stockpile very well, there will not be leakages from the government’s stockpile to non-state actors.”

In the same vein, the UNREC Director, Mr. Anselme Yabouri, said that Nigeria is one of the countries that is experiencing some of the negative eftects of the proliferation of SALW as a result of the spillover effect of the crisis in Libya and Mali as well as unresolved internal conflicts in different parts of the country especially in the North East, Niger Delta and Southern regions.

Yabouri who was represented by the Project Coordinator of PSSM and Political Affairs Officer, UNREC, Mr. Lewis Kanyoko, noted that "relibale data on the numbers of these weapons circulating freely in the country is unavailable, analysts have in recent times estimated that of the abouy 500 million weapons that may be circulating in West Africa in 2010, some 70 percent of these could be found in Nigeria".

As alarming these figures seem, he said, it is very clear thatbif left unchecked, this scourge will not only jeopardise the developmental gains achieved over the last 50 years, but will aldo impede the nation's capacity to achieve its development targets and therefore negatively impact on future generations.

He stressed that this has highlighted more than ever before the critical need not only to control the flow of arms in the non-state sector, but equally importantly, state owned arms.

The UNREC boss said the PhysicalSecurity and Stockpile Management (PSSM) in the Sahel project aims to support states in the region prevent the diversion and trafficking of SAWL and their ammunition, by improving the physical security and management of national stockpiles.

For the EU, he said, giving financial and technical support towards ensuring the overall peace, stability and growth in the West Africa sub-region remains a political priority.

To this end, he said that the Union is working in close cooperation with parners such as the United Nations, ECOWAS, as well as the African Union, to prevent or successfully contain a number of conflicts in the continent.