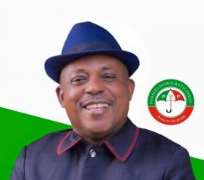 Prior to the just concluded elective convention, there were projections by some politicians and sections of the media that it was a a make or mare outing. In fact some opponents and political analysts even said the party will die with the convention, judging from internal disagreements.

Few hours to the date of the convention, even President Mohammadu Buhari of the All Progressives Congress (APC), was reported to have joined the fray by asking rhetorically at Kano State, whether the PDP still exists? The APC, through its spokesman, Mr. Bolaji Abdulahi, said the party criticised the convention based on antecedents and early alarms raised by some aspirants ahead of the election.

Indeed the PDP in its usual way of the past, witnessed disagreements concerning scheming for nominations into committees, delegates lists and alleged missing of party's billions of Naira. Other issues were micro zoning of the party's chairmanship positions given the South, alleged plot by former President Goodluck Jonathan and General Ibrahim Badamosi Babangida (IBB), to outwit some governors that backed micro zoning in favor of Prince Uche Secondus, the cry against planned monetary inducements to delegates and calls for resignation of the Caretaker Chairman, Senator Ahmed Makarfi on ground of having presidential election ambition, which he denied.

These arguments and plan by some governors and aspirants to sweep the elections into the NEC, nearly headed the party to the speculations of the doomsayers, but were surprisingly suppressed. The Makarfi Caretaker Committee and the party's communication machinery left no stone unturned to douse what it called propaganda designed to thwart the convention.

Former publicity secretary of the party, Prince Dayo Adeyeye had raised alarm of alleged plot by the APC, to either sponsor splinter convention for PDP's so-called aggrieved members or use the EFCC to arrest 50 of its top members on trumped up corruption charges. Either of this as the PDP alleged were to stop the convention. The PDP also insinuated that the APC also delayed its convention, to see what may come of theirs (PDP's) as it did before. All allegations were however rebuffed by the APC as false.

But the PDP and the Makarfi leadership, learning from bitter lessons of the past, and as clamoured by many Nigerians, promised a level playing field, and shocked the doomsayers and the media by by enthroning a new NEC without walkouts.

Prince Secondus' landslide victory, though premised on charisma and past service, is also attributed to the backing of many governors from the South, spearheaded by Governor Nyesom Wike of Rivers State. Wike is believed to have worked against the interest of former President Jonathan, his godfather but he denied, just as the ex-president said he had no special candidates.

The convention done amidst tight security, following a red alert issued by the American Embassy, of plot by Boko Haram to bomb Abuja, was organized quite differently from past ones.

Defying the sudden motor petrol scarcity and delay in disbursement of November's financial allocations to states, the candidates and their sponsors mobilized their supporters and delegates to the convention. Some where camped in hotels in Abuja, few days to the date, an arrangement which caused scarcity of choice hotels in central parts of the city, during the period.

Delegates list, unlike before, did not turn out to be different versions that used to carry different names and faces.

As early as possible, the Eagles Square in Abuja, was set for the convention. Everything, including ballot boxes and booths were on ground, just as combined security team of the Federal Government where on ground to quell any political squabble or bomb attacks.

Officials for the election, other organizers and security operatives, first got into the main bowl of the square to set everything for take off of the convention. Before 10a.m., the gates had been locked and manned by fierce looking security personnel and ferocious mastiff dogs scaring away impostors.

Accredited delegates were conveyed in Abuja Urban Mass Transit buses from guest houses and driven into the arena to cast their votes. This arrangement also provided orderliness in the convention.

The security was tight to the extent that some officials, some party bigwigs and the journalists who had accreditation tags but went a bit late, also found it hectic to enter the arena.

Supporters of the NEC aspirants and aspirants for 2019 general elections, were bared from entering as well. As a result, the major roads around the Eagles Square and adjourning ones served as spaces for street carnivals by supporters of the politicians who drafted them there. Prominent, were Pro-Atiku Abubakar, Pro-Sule Lamido groups and others.

Nearly all roads and available wall spaces around the vicinity of the Eagles Square were taken over with posters of the NEC aspirants and those aspiring for 2019 general elections.

The way posters and banners of some aspirants for the PDP NEC were conspicuously littered around, especially those of Prince Secondus, besides positive side talks and ovations, easily showed where the money was and we're the current was going. For Chief Dokpesi, a defectee hyped by his Raypower radio as " foremost" contestant, the atmosphere at the venue signalled failure for him, so was it for Profs. Adeniron and Odedujo. Chief Olubode George and others wisely withdrew, else would likely have faced same defeat.

Although the election which commenced after vital amendments of the party's constitution, following motion by Governor Henry dickson of Bayelsa State, was challenged by Chief Dopkesi and Prof. Adeniron and their supporters as, rigged, they later threw in the towel by congratulating the winners. This has been seen as one signal to a better PDP, ahead 2019.

Meanwhile, the new publicity secretary of the PDP, Mr. Kola Olagbediyo, a journalist, has cautioned the APC to mind its business, convene its overdue convention to show its mettle as well as deliver its promises to Nigerians, instead replacing its mandate with blame game.

He said, the just concluded convention is adjudged as one of the best in the country, wondering why the APC criticised it when it has not even organized itself like a ruling party.

With the feat of successfully electing new executives and the exodus of defectors expected to follow Alhaji Atiku's return, observers are saying the party might come up stronger for the 2019 general elections.

But the PDP may contend with the just instituted influence of the Nyesom Wike group of governors whose individual and clique ambitions may cause ripples over scheming for tickets for the 2019 general elections. The APC's spokesman, Mr. Abdulahi has already branded Governor Wike as the Leader of the PDP.

Speculations are also rife that Governor Wike and his new clique could also frustrate Alhaji Atiku's presidential ambition. This is premised on the clique's incumbency and financial power as well as the grit with which the outsmarted former presidents Goodluck Jonathan and IBB in the convention.

As the political permutations continue, Ann's as some Nigerians await the PDP in the next general elections, the ball is in the party's court, to continue to keep its house in order, to make good the desire to reclaim power, as President Buhari who is adored for his populist anti-corruption policy, has given indications to slug it out with the party, again.