Nigeria will save N43trn from non-importation of raw materials in 5 years: Dr. Ogbonnaya Onu 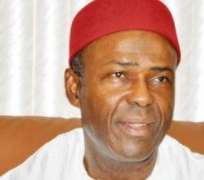 The Ministry of Science and Technology says the mechanism being instituted by the ministry to stop importation of raw materials if successful will save Nigeria N43 trillion in five years.

Dr Ogbonnaya Onu, the Minister of Science and Technology made this known in a statement issued by Mr AbdulGaniyu Aminu, the Deputy Director, Press in Abuja.

Onu was speaking during an interactive session on the National Science, Technology and Innovation Roadmap (2017 to 2030) at the Federal Institute of Industrial Research (FIIRO), Oshodi, Lagos recently.

He said that the ministry was embarking on a silent revolution that would enable Nigeria to create more jobs and fight poverty, adding that some industrialised countries did not have natural resources but were endowed with knowledge-economy.

He said that such a revolution would also ensure that Nigeria utilised its resources and intellectual capacity to add value to nation's Gross Domestic Products (GDP).

“The ministry has already identified those raw materials and products that Nigeria can produce and is providing guidelines on programmes and designs to ensure that Nigerian professionals are given preference in execution of contracts.

“In the next 20 years, we want Nigerian firms to compete with American firms for jobs as the interest of Nigeria will first be considered above that of any expatriate,“ he said.

Onu appealed to members of Academic Union of Research Institutes (ASURI) to call off their ongoing strike, while stressing the need for the union to educate their members about the roadmap.

The minister expressed renewed commitment to the welfare of workers as a matter of priority.

He said that efforts were being made to formulate a policy framework that would move the country from resource-based to knowledge-based and innovation-driven economy where professionals could help to create jobs.

Onu said that more than 200 organised private and manufacturing companies were fully involved in the preparation and final drafting of the National Strategy for Competitiveness in Raw Materials making it all-inclusive.

Mr Ekanem Udo, the Director of Science and Technology Promotion in the Ministry said the roadmap would stimulate research activities to ensure commercialisation of research results for economic development.

According to him, the roadmap is also intended to provide a long term science and technology framework and facilitate the creation of knowledge.

“It will also create the platform to change the mindset of Nigerians to appreciate technology,'' Udo said. (NAN)