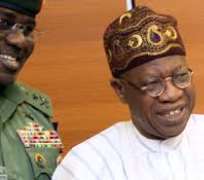 The increased attention and support being given the Creative Industry by the Buhari Administration has started yielding fruits, the Minister of Information and Culture, Alhaji Lai Mohammed, has said.

Speaking at the premiere of the movie ”Wedding Party 2” in Lagos on Sunday, the Minister listed the pioneer status granted to the Industry, the stepped-up anti-piracy campaign and the decision to seek stimulus capital for the Industry from the Central Bank of Nigeria (CBN) as some of the positive results.

He recalled that shortly after the Creative Industry Financing Conference in Lagos earlier in the year, he led a delegation of the film industry stakeholders to the Inspector General of Police, which resulted in the formation of anti-piracy units in all the 36 states of the federation

”The subsequent extensive piracy raids have now resulted in the confiscation of pirated films worth hundreds of millions of Naira. In fact, criminal prosecutions of culprits have now started,” Alhaji Mohammed said.

He also recalled how, shortly after the Conference, the federal government granted pioneer status to the Creative Industry to reduce financial burdens on new investments and encourage both foreign and local investments into the film industry.

The Minister congratulated Ms. Mo Abudu and all those involved in the production of ”Wedding Party 2”, saying with the blockbusters being churned out by Nigerian film producers, ”we can formally announce to the world that a true film industry has arrived in our Nollywood.”

Meanwhile, Alhaji Mohammed has declared the arrival of a new dawn in the nation’s Creative Industry

”I am totally encouraged that Nigeria is indeed on track with all the capabilities to diversify our economy in order to create jobs and boost our Gross Domestic Product. It’s great to note that the Creative sector is taking the lead to achieve this,” he said at the opening of the musical ”Fela and the Kalakuta Queens” at Terra Kulture, also in Lagos on Sunday.

He said the vibrancy in the sector is largely due to the collaborative efforts of the Public and Private sectors, which the likes of Ms. Bolanle Austen Peters, founder of Terra Kulture, have leveraged with impressive results

The Minister congratulated Ms. Austen Peters, her management team and all the creative talent involved in the making ”Fela and the Kalakuta Queens”, saying: ”This production will no doubt take us to another level in our achievements and I want to assure you that this government is with the Creative sector all the