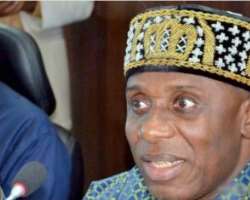 The Minister of Transportation, Rotimi Amaechi has lambasted his protégé and Director-General of the Nigerian Maritime Administration and Safety Agency (NIMASA), Dakuku Peterside of failing to implement the report of a committee

Speaking in Lagos on Thursday, Amaechi said he was not satisfied with the level of development of the maritime industry, warning that heads may roll in the industry soon.

He said, “As the Minister of Transport, I sat down with all of you and you set up a committee, the committee submitted its report, you indicted us there. When I got the report I asked the NIMASA DG who is also the chairman of the committee why are you not implementing the committee’s report, he said he is yet to get directive from me and I gave that directive in writing.

“So he is yet to answer why he is not implementing but I am still not satisfied with the industry because I believe that the industry is supposed to produce more money than it is producing. I am not looking for financial audit but performance audit and heads may likely roll when the audit report comes.”

The content of the reform committee’s report remains largely unknown as both NIMASA and the Federal Ministry of Transportation have kept it closely to their chest.

Dakuku Peterside has, however, been accused of incompetence since his appointment as NIMASA DG on March 10, 2016.

“Government should stop giving excuses why they failed and look at issues in the industry. We have an administration for two and half years in office, things have gone worst, they have not even visited our maritime institution in Oron. Instead we are spending money abroad; the international community are laughing at us because they know we do not know what we are doing, and we are saying enough is enough,” Ogbeifun stated.