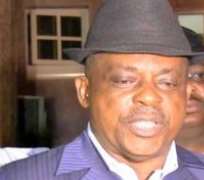 Secondus saw off other nine contestants who vied for the same position but not without protests.

Two  of the contestants, Chief Raymond Dokpesi and Prof. Tunde Adeniran, made their disapproval of the process that yielded Secondus known  when  it became clear that they had lost out.  Prof. Taoheed Adedoja was reportedly still studying the situation.

The candidates announced their positions in separate interviews with newsmen at the Eagle Square venue of the convention on Saturday in Abuja.

Dokpesi, founder of Daar Communications, said he rejected the outcome of the elections following alleged distribution of a “so-called unity list” to delegates, describing it as a charade that may destroy the party.

He said that the process of voting had been rigged following the distribution of the list, which contained names of candidates believed to have won elections into various positions in the party at the convention.

He explained that the 21 names of candidates contained in the list appeared on the ballot papers as number one and in the voting boots as number one.

Dokpesi said that complaints were lodged to the Chairman of the Convention Electoral Committee, Mr Gabriel Suswam, who confirmed that he had seen the list with some delegates but that he was overwhelmed.

He said it was unfortunate that a party which was just getting out of a major leadership crisis would be involved in acts of impunity and election malpractice.

He called on the party leadership to urgently rectify the anomaly before it became another major challenge in the party ahead of the 2019 general elections.

Details of the poll had not been officially announced as of the time of going to press.

According to reports, Secondus received strong backing of the 11 governors elected on the platform of the party, as they stood in solidarity with him throughout the exercise.

As of the time of filing this report at 12:10am, Secondus and Wike were still at the Eagle Square as the votes of the elections were being sorted and counted by members of the electoral committee.

The unflinching support by the governors was said to have boosted Secondus' chance in the North where Adeniran had initial support.

A member of the party from the North said that “the northern caucus apart from Prof. Jerry Gana and Senator Ibrahim Mantu decided to support Secondus because he was the toast of the governors and the majority members of the party.”

Secondus told one of our correspondents that if declared winner, he would work with all those that contested against him.

Others contestants, apart from Chief Olabode George, announced their withdrawal from the race shortly before the commencement of the exercise.

George said on Friday at a press briefing that he was withdrawing due to the refusal of the party to micro-zone the office of the national chairman to the South-West.

The party had zoned the office to the entire southern part of the country, while it also ceded the presidential ticket to the northern region.

All the aspirants except Ladoja, Dokpesi and Secondus eventually contested the election.

Ladoja told one of our correspondents that he was still consulting and would speak on the outcome of the convention soon.

“I'm consulting and will speak soon. We need to study its outcome before making any pronouncements,” he said.

Secondus, in an exclusive interview with one of our correspondents in the early hours of Sunday at Eagle Square, said that the love of the party remains paramount in his heart.

He said, “It is the party first. We have no other reason to remain contestants without the PDP. Our interest is in the party and the desire to wrest power from the ruling All Progressives Congress. That should be our goal.

“None of us can do it alone. It is in our interest to come together and fight for Nigerians. All the contestants are capable of leading the party. I want to appeal to every member of the party to come together and be united. I'm appealing to all and sundry, we should all remain united and be committed.”

Meanwhile, there was a mild drama at the Eagle Square when Dokpesi abandoned his Edo State stand and walked to Rivers State stand to sit with Secondus as the results of the election were being awaited.

A national daily, The Punch, reports that  Adeniran, a former Minister of Education, has called on the national leadership of the party to hand over the affairs of the party to its Board of Trustees.

According to the report, Adeniran stated this after he walked out of the Eagle Square in company with his supporters to protest the outcome of the national convention.

The Director of Media and Publicity of the Adeniran Campaign Organisation, Taiwo Akeju, who spoke on behalf of the former minister, rejected the entire electoral process.

He urged the Senator Ahmed Makarfi-led National Caretaker Committee to hand over the party to the BoT in order to conduct “a credible election.”

Akeju said, “We reject the entire electoral process of December 9, 2017. The election was grossly compromised to achieve a predetermined end in line with the illegal 'Unity List' prepared by Governors Nyesom Wike and Ayodele Fayose and foisted on the entire delegates.

“Consequently, we submit that this election is a sham and its result is unacceptable. We reject it in its entirety.

“We consider this so-called election as a travesty of democracy and due process, which further entrenches the culture of impunity that has done a great damage to the party in the past.”

The newspaper further reorted that the Ekiti State Governor, Ayodele Fayose, has asked those who contested the PDP national chairmanship seat but lost to Secondus, to accept defeat in good faith.

Fayose also said he had no regret, canvassing support for aspirants on the list.

He insisted that some people kicked against the list because they did not win the election.

He said, “Anyone who will contest the result of this election at the court of law is an enemy of the party. It is not good to be a bad loser. If you did not win, just take it in good faith and support the winner”

Details on of the winners of other elective positions will come later.

The Rainbow, with agency/online reports