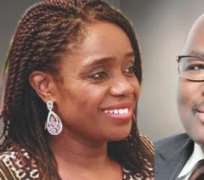 The Trusted Shareholders’ Association (TSA) on Thursday issued a 7-day ultimatum to the Minister of Finance, Mrs. Kemi Adeosun within which to resign her position for allegedly interfering in the forensic probe of Oando Plc by the Securities and Exchange Commission (SEC).

The shareholders group said Adeosun’s interference in the regulatory functions of SEC was a breach of public trust and confidence.

The shareholders also asked President Muhammadu Buhari to immediately sack the Minister should she decline the call for resignation within the stipulated period.

Alleging sundry allegations of complicity and compromise in the forensic auditing of the Oando accounts against Adeosun, the association said that the Minister deliberately suspended the Director-General of SEC, Munir Gwarzo to stop the audit.

National Chairman of the Association, Alhaji Mukhtar Mukhtar alongside some civil societies and stakeholders from Truth and Transparency Initiative conveyed the shareholders’ position in a press conference in Abuja on Thursday.

Reading a text titled “Illegal and Undue Interference in the Forensic Audit of Oando Nigeria Plc by Mrs. Kemi Adeosun, the Minister of Finance”, Mukhtar said that based on the palpable allegations of complicity by Kemi Adeosun, she has obviously lost the moral ground to continue to head the Ministry of Finance.

He said, “As concerned shareholders and stakeholders in the capital market, we are highly bothered about the propriety and the timing of the suspension which is coming at a time when regulatory agency (SEC) had made weighty discoveries in its preliminary investigation of Oando Nigeria Plc, for which the institution was daringly challenged in court by the company and lost.

“In the same vein, we also wonder why it took the Minister 10 months to take action on a petition that alleges financial impropriety on the part of the DG. Why has she suddenly realized the need to suspend the DG now that he is clearly resolute in pursuing the allegations of breach of corporate governance against Oando Nigeria Plc to a logical conclusion? The facts do not add up.

“Certainly, the undue interference of Mrs. Kemi Adeosun in the operations of the capital market is ill-motivated and detrimental to its stability and growth. The Minister should be more concerned about restoring investors’ confidence as a way to attract more investments towards growing the economy instead of becoming a tool in the hands of moneybags.

“It is utterly shameful that this is happening under a government that has consistently proclaimed its disdain for corruption.

“We have also seen the number of reported cases of infractions dropped by 87 percent from 2016 to date.

“We therefore use this medium to call on Mrs Adeosun to honourably resign her position as the Minister of Finance within seven days, failure of which we call on President Muhammadu Buhari to immediately sack her.”

Muktar who said that the mismanagement of Oando has led to the suffering of his members, saw no reason why Gwazo should be suspended. He however commended the House of Representatives for intervening in the matter.

“Gwarzo should not be suspended because of his refusal to discontinue investigation into a dying company, Oando Nigeria Plc, whose management is making frantic efforts to prevent a comprehensive audit of its accounts. We fear that Gwarzo’s suspension is another step, after the Federal High Court threw out the suit by Oando, to frustrate the forensic audit and provide a soft landing for the organization.

“We are happy to hear that the ICPC has initiated an investigation of financial allegations against Gwarzo and hope that he will present himself to defend such allegations. In the interest of fairness and transparency, the ICPC should also fast track the investigation process.

“We however commend the House of Representatives for directing the Finance Minister to reinstate Gwarzo and commence providing the circumstances that led to his suspension.

“Shareholders of Oando are currently suffering because of mismanagement of their investments by the company whose current and long term liabilities stood at over N799 billion as confirmed by its external auditors, Ernst and Young. If things are left to remain this way, banks may soon take over the company.

“As such the management of Oando Nigeria Plc led by Mr. Adewale Tinubu must also step aside to allow for unhindered forensic audit into the weighty allegations against the company. If the company truly does not have hidden agenda and has complied responsibly within the provisions of the laws of the land, it should allow its books to be looked into,” he added.