The Message of indecent dressing 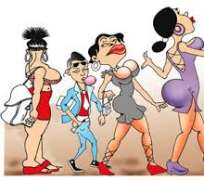 Indeed it is worth crying for the way modesty have become meaningless in our society. Fortnight ago, on my way to my place of internship during the early hours of the day, I met a lady whom I engaged in a brief discussion about a piece of clothe she was wearing which reveals more than it conceals. Seeing how comfortable she was roaming about half-Unclad, I couldn't help but asked, ‘My dear aínt you feeling insecured in this dress of yours?’ She scornfully said “I walked pass my parents before leaving home wearing this dress, I know they are more concerned about me”. I smiled and added ‘Man during his earliest days roamed the earth Unclad, as he achieved civilization he began to use leaves to cover his nudity. As times goes on, man was able to manipulate animals skin to design clothes, so covering ones body is the highest peak of civilization that man has achieved in regards to clothing’.

Furthermore, the repercussions of immodesty in dressing is nothing to write home about. It result in adultery, fornication, rape and lack of respect among others. A man is so vulnerable to be sexually aroused by mere erotic thought not to mention seeing a half Unclad lady passing or sitting beside him. In order to quench his desire he will not hesitate to use everything at his disposal whether in kind or cash to get between her legs. If he is not witty enough to convince her and he don’t have the material things to give, he will use force. On the other hand, the ladies being obsessed with material things will easily fall for the little lies, fake promises or just few witty lines is enough to get her to bed. After the first time, it will be difficult for her to stay without it, so with or without the material things she will give her body out just to quench the desire burning inside her. Fornication have set in, which is not the accepted social institution adopted by human society for regulating the relation between man and woman that is recognized by custom or law. Fornication, adultery and rape are not an act of civilization rather they are tools employed by slave masters against their slaves, those in power against the less privileged, rich against the poor during the era of slavery. Unfortunately, today people have modernized such uncultured behaviors and incorporated them into our society in the name of fashion,democracy, freedom and women’s rights.

In those days, women were forced to work together with men in farms and plantations as slaves but today women are fighting to work with men in offices,market places or political appointments all in the name of women’s rights.

In those days, women were forced to serve their masters topless and unclad in offices, houses, farms or party places but today women willingly dress half Unclad or completely Unclad in strip clubs all in the name of fashion.

In those days, slave masters forcefully have sex with female slaves in order to satisfy their sexual desire. Then, women were considered sex objects and instruments for the gratification of sexual lust, but today women willingly and enthusiastically give their body in the name of love or materialism.

In our society today, saying “I love you” to opposite sex is synonymous to “I want to have sex with you”, relationships without sex is somewhat an impossibility, virginity becomes a burden, chastity is now at its lowest ebb, fornication and adultery are no more taboo as long as there is mutual agreement between the parties involved. Today parents are comfortable if their child is in a live-in relationship but will never allow their child to marry at such age, a wife is comfortable if her husband will have affairs outside marriage as long as he is not marrying another wife.

Neither the religious leaders nor their followers escape the evil of fornication and adultery. Many cases of religious people engaged in such acts have been mentioned in our society and it is happening in every religion, both Christianity and Islam, the two major religions where these acts attract strict punishment. In Islam, Muslims are commanded to refrain from approaching fornication or adultery (Quran Isra 17:32), fornication attracts hundred (100) lashes (Quran Nur 24:2) while adultery is punishable with death by stoning. So also in Christianity, women are asked to be modest and sensible about their clothes (1 Timothy 2:9), also adultery and fornication are forbidden (Leviticus 18:20).

It is said; show me your friend and I will tell you who you are, that is true, but your dressing too goes a long way to tell people about you without presenting a friend. Just as a student can be recognize with his uniform so is a lady with indecent dress or so called dress-to-kill will pass the message of “I’m ready for sex” even if that is not her intention.

Sometimes I put the blame on guardians especially fathers and brothers which is intrinsic in them to dislike another man looking at their daughter, sister or wife. It is intrinsic in straight man to safeguard women who are related to him from strangers, but we have lost that aspect in us today while we are busy looking at other people's daughters and wives.

So my advice to women, do not dress for men; dress for yourself. It’s not your responsibility to please any Tom, Dick or Harry with your sex appeal. Instead, prioritize strength, dignity and then dress decently and modestly.