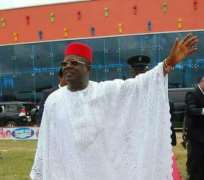 When our Lord Jesus Christ taught us how to pray in the Bible book of Mathew chapter 6, He included in verse 10 " ... let your will be done on earth, as it is in heaven". This particular clause in the prayer underscores the need for positive uniformity in the establishment of the will of God on earth. Going by the creation acts and the mandate given to man by God at creation in the book of Genesis, it suffices to say that development programmes intended for the common good of mankind like we have in Ebonyi state under Chief David Nweze Umahi's administration is in compliance to the will of God. That real development programmes are going on in Ebonyi state is not in doubt. The ultra-modern bus stop with commuters' lounge, the Green [solar power] house which were commissioned by OBJ on 7th November as well as the pedestrian crossover bridge all at Ebonyi State University permanent site gate; the 700-meter long twin modern over-head bridges at Presco and Akanu Ibiam roundabouts which were commissioned by President Muhammadu Buhari on 14th November; the third twin overhead bridge at the International market junction as well as the 14.5 kilometer section of the Abakaliki - Afikpo road; the 18.5 kilometer Nkwegu - FUNAI road; the 15.5 kilometer Nkalagu - Nigercem road; the 25.5 kilometer Amasiri-Uburu-Okposi road; the 23.5 kilometer Hilltop - Nwofe Agbaja virgin road; the reconstruction of Ezzamgbo - Effium road; the Onueke and Afikpo urban road networks; the clean and beautiful environment of Abakaliki municipality; the reconstruction/rehabilitation of the entire Abakaliki urban road network which has a total distance of 500 kilometers; the modern gate houses at Government House Abakaliki and the Ebonyi Police Command Headquarters; the street lights along the entire roads in Abakaliki municipality; and the modern roundabouts with aesthetic water fountains. Others include the security of lives and property which has turned Ebonyi state to a tourist and an investment destination; the miraculous and monumental return of peace to the hitherto war-ravaged Ezillo and Ezza-Ezillo communities as well as to other communities in Ebonyi state; the ultra-modern Abakaliki Township Stadium; the unprecedented economic empowerment of Ebonyi people even in the Diaspora; the revitalization of portable water supplies in Ebonyi state; the agricultural revolution which has made farming a profitable venture; the exposition of the beauty and benefits of farming to our school children through the school farming program; the resumption of oversea scholarship program, reduction of EBSU tuition fees by ten thousand naira at a time when other universities are hiking their respective tuition fees as well as the massive repositioning of the education sector which gave rise to the improved ranking of Ebonyi state as tenth in the country by examination bodies like WAEC and NECO and a host of other projects all form evidence-based proofs to that claim. However, what pundits and well-meaning watchers of the revolutionary developmental strides of Governor Umahi in Ebonyi state were wondering about was whether the infrastructural revolution which educed the 'dance of development'' from Chief Olusegun Obasanjo on 7th November; and doses of encomia from President Muhammadu Buhari and other chieftains of All Progressive Congress like Chief Arthur Eze on 14th November could be extended to the hinterlands beyond Abakaliki municipality and the satellite urban settlements of Onueke and Afikpo. As usual, a faction of the irreconcilably fragmented opposition party in Ebonyi state is exploiting this innocuous and genuine concern of watchers of Ebonyi developmental journey to a mere object of crass political propaganda and blackmail designed to score cheap and ephemeral political points even though political campaigns were yet to begin in Ebonyi state. The recourse to uploading photo-shopped pictures of bamboo bridges and bush paths from Ado, Etenyi and Idokpe on social media platforms and labeling them as Ebonyi bridges and roads is as unpatriotic as it is condemnable. However, a positive media gang made up of progressive media practitioners from all parts of Ebonyi state who are committed to truth and good governance took up the challenge of unraveling the true situation about the development program of Governor Umahi in Ebonyi state. The group drew up a schedule of project inspection tours NOT for Abakaliki, Onueke, Afikpo or other towns in Ebonyi state; but for the hinterlands that make up the 13 Local Government Areas in Ebonyi state. The purpose of the project tour was to determine the comprehensiveness of Governor Umahi's development agenda or programme in Ebonyi state. So far, the project inspection train has gone to Ohaozara L.G.A. in Ebonyi south district; Ikwo L.G.A. in Ebonyi central district and Ebonyi L.G A. in Ebonyi north district. As usual, the tour was quite revealing: In Ohaozara, projects like water boreholes, a brand new sports pavilion, a sound modern borehole drilling equipment, a brand new classroom block at Igwebuike primary school, the new administrative block block as well as the chairman's official residential quarters, the turnaround renovation/remodeling of a dilapidated classroom block at Ugwulangwu High school, the Uchu-Inya and Agbanyim bridges, the acquisition of six 300 KVA ABB transformers for the rural electrification of six communities - two in each of the three zones of the Council area - and the beautification of Ohaozara council headquarters among other projects done within six months on the saddle show that Princess Nkechinyere Iyioku who doubles as both the council chairman of Ohaozara L.G.A and the Ebonyi state chapter chairman of Association of Local Governments of Nigeria (ALGON) is a committed agent of development and an apostle of the transformational administration of Engr. David Umahi in Ebonyi state. The large expanse of rice farm, the cassava plantation as well as the vegetable garden nourished by irrigated water which make up Ohaozara L.G.A. demonstration farm, the greenery of both the cassava plantation and the garden as well as the ripe ready-to-be-harvested rice seeds were proofs that the diligence and energy invested in the farm were yielding the targeted food security in Ohaozara, nay Ebonyi state. It is instructive that in the respective council areas so far visited, council area projects lie side-by-side with Ebonyi State Government projects. For instance, in Ohaozara, we saw the concrete-based Uburu internal road network, the Amasiri-Uburu-Okposi road which is a federal road being built by Governor Umahi; in Ikwo, Governor Umahi built the Federal University of Ndufu Alike, FUNAI, road, a health centre for the FUNAI host community, and the ongoing Odomowo - Oferekpe road; while in Ebonyi L.G.A., Governor Umahi's projects included the 15 kilometer Nwiboko Obodo road which links Ebonyi state with Ado L.G.A. of Benue state, the Liberty ultra-modern market in Kpiri-kpiri, the General Hospital in Odomoke, the street light project in Ugbodo among others.

From the foregoing, it is certain that Governor Umahi's development programme for Ebonyi state is a comprehensive one in which all hands are on deck both at the state and local government council levels to ensure uniform transformation of all parts of Ebonyi state on all fronts. One can therefore safely say without equivocation that in Governor Umahi's Ebonyi state, development is done in the rural areas just as it is in Abakaliki - the state capital.