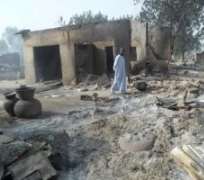 Suspected Boko Haram suicide bombers have killed at least 12 other people in an attack on a market in the northeast Nigerian town of Biu in Borno state, officials said on Saturday.

Eight men and four women have been counted dead so far, said Aliyu Idrisa, a community leader, adding that the blasts struck while aid workers were distributing food to people affected by the eight-year conflict with Boko Haram.

A government official said 15 dead had been recorded at a hospital and 47 people were injured. Officials spoke on condition of anonymity as they were not authorized to speak to media.