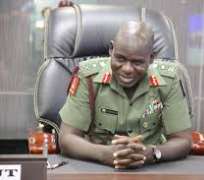 The National Committee of Yoruba Youth and the COALITION of Civil Society Groups against Terrorism in Nigeria, have commended the Chief of Army staff, Lieutenant General Tukur Buratai, for effecting the immediate and total payment of salaries and all operational allowances of troops, currently involved in the Military's Operation Lafiya Dole, in the insurgency troubled North Eastern part of the Country.

The group, in a statement jointly signed by Comrade Odeyemi Oladimeji and Princess Adeyinka Adedayo, lauded the leadership of the Nigerian Army, for prioritizing the welfare of officers and men, of the Nigerian Army, an action which the group says, have enhanced the capacity of Nigerian troops, in the war ravaged region, to tackling the remnants of the dreaded Boko Haram group, who are still embarking on isolated attacks, in some parts of the region.

The group said, that the action of the Nigerian Army leadership, have laid to rest, rumors and unfounded speculations, of some 'failure' of the Army, to pay the salaries and operational allowances of its officers and men, as at when due.

"We want Nigerians, to by this latest development, clearly understand the untiring commitment, of the administration of President Muhammadu Buhari, to the war against terrorism and its resilience, towards bringing a total end, to the Boko Haram insurgency." the statement said.

``We believe that the commitments of the Army leadership, towards the welfare of its officers and men, is a major instrument of calling for more patriotic commitment, to the war against Boko Haram, and the protection of our lives, properties and the territorial integrity of our dear country, against all forms of internal and external aggressions."

``We are forever thankful to President Muhammad Buhari for the resilient effort of his government for the ample political will to ending the insurgency" the statement concluded.