Southeast not excluded in appointment of judges: NJC 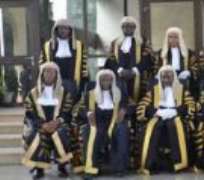 The National Judicial Council has debunked denied allegations that the South East region of the country was sidelined in an ongoing process that will lead to elevation of 14 Judges to the Court of Appeal bench.

According to a statement by its Director of Information, Mr. Soji Oye, the council considered merit and geographical spread in the appointment of Judicial Officers to the Court of Appeal.

The statement explains that in considering appointment for 14 vacancies currently existing in the appellate court bench and to ensure that each zone is adequately represented, states that already have three serving Justices were excluded.

NJC said its attention was drawn to an on-line publication and in some newspapers alleging that none of the candidates it shortlisted for appointment to the Court of Appeal was from the South-East.

“This allegation is nothing but a figment of the imagination of the on-line media as the exercise is on-going and no candidate has been recommended so far. “To put the records straight, appointment of Judicial Officers to the Court of Appeal is done on merit and geographical spread. “Section 2 of Court of Appeal (Amendment) Act, 2013, governing the appointment of Justices of Court of Appeal provides that the total number of Justices to be appointed should not be more than 90 plus the President. The Court however, currently has 76 Justices leaving vacancy for additional 14 Justices.

“States like Adamawa, Kebbi and Sokoto have zero representation which informed the need to include them in the current exercise. “Appointments are made to the Court based on the elevation of Appeal Court Justices to the Supreme Court, retirement at the age of 70 years, or death. Such vacancies are filled with judicial officers from the zone of the Judge who died, retired or elevated.

“It is therefore unfair for the online media to claim that the National Judicial Council recommended no candidate from the South-East which currently has 13 Justices at the Court of Appeal. “Journalists are pleased advised to always balance their report to avoid litigation,” the statement read.