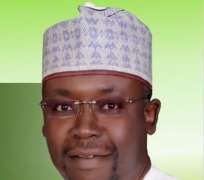 Director General of the National Emergency Management Agency (NEMA) Alhaji Mustapha Mainaja has been accused by a pro- Democracy and Non-Governmental organisation-HUMAN RIGHTS WRITERS ASSOCIATION OF NIGERIA (HURIWA) of tribalism and discrimination in the distribution of relief materials to victims of disasters in Nigeria.

In a press statement by the National Coordinator Comrade Emmanuel Onwubiko and the National Media Affairs Director Miss Zainab Yusuf, HURIWA stated that the Director General of NEMA since assuming office nearly a year ago has consistently skewed the distribution of relief materials bought with tax payers’ money in favour of his North East zone of the country.

The Rights group specifically condemned the discriminatory distribution of relief materials to victims of market fire incident in Yobe State which is the state of origin of the Director General Mustapha Maihaja and the loud silence of NEMA and the office of Director General to other recent market fires in Calabar, Cross Rivers State, Lagos and Enugu State.

HURIWA has therefore asked President Muhammadu Buhari and the National Assembly to effectively redirect the Director General of NEMA to stop forthwith his ethnically and religiously motivated pattern of distribution of relief materials or be sacked.

The Rights group has also tasked the National Emergency Management Agency to ensure accountability and transparency in the distribution of assistance to victims of disasters by adopting a modality that will efficiently identify flashpoints of natural disasters, pin-point the exact victims and such unfortunate scenarios such as market fires so as to equitably distribute materials across board.

“We urge the National Emergency Management Agency (NEMA) to ensure that the pattern of distribution of relief materials meets global best practices and avoid the political pitfall of being deployed to curry political favour.

"NEMA must work in synergy with the various state disaster management Agencies to coordinate the distribution of relief materials where necessary and the information must be publicly transmitted in the media for everyone to see.”

“Only few days back the Yoruba section of Watt Market in Calabar was consumed in an inferno leading to the destruction of 50 shops. In Enugu Timber Market, about 50 shops were lost to fire so also was similar incident happened in Lagos but NEMA’s Director General has yet to say a word on when to deliver relief materials.”

“The Director General even personally assisted traders whose shops were burnt in an inferno in his State of birth Yobe whereas in places like Kano; Warri and most major markets in the South East of Nigeria affected by inferno are never the immediate concern of the management of NEMA headed by the Yobe state born politician said to be eyeing the position of governor in the 2019 polls.”

HURIWA recalled that the National Emergency Management Agency (NEMA) said in a media statement that it delivered relief to assist 149 traders whose properties were destroyed in fire at Nguru Central Market in Yobe.

According to the information, the assistance is to help them rebuild their shops and include 1200 bags of cement, 732 bundles of roofing sheets, 300 bags of roofing nails, 1485 ceiling boards and 3000 piece of planks.

HURIWA said that NEMA’s Director General Mustapha Maihaja said in a statement the items would be distributed directly to affected victims by the team of the agency together with market committee members.

“Engr. Maihaja also inspected the damages in the burnt market after which he emphasized the need for more caution against fire disaster especially during this dry season,” said NEMA spokesman Sani Datti, who released the statement.

HURIWA citing the official claim of NEMA quoted NEMA as stating thus: "Following the market fire incident that occurred on Saturday 11th November 2017, a team of NEMA staff were deployed same day to assess the damages for the relief intervention.

HURIWA however affirmed that: “This politically motivated sharing of relief materials to his kinsmen seriously goes to the fundamental issues that most Nigerians have often asked since the last few years whether this national institution put in place with tax payers’ money is exclusively to benefit victims of disasters in a particular region of the country whereby the Director General comes from. This same DG of NEMA is not known to have visited the states in the South and North central Nigeria recently affected by disasters of one form or the other. The Warri main market also was consumed by a fire incident almost same time as that of Yobe state but the DG of NEMA seems to be funneling all the relief materials bought with tax payers money to just a favoured part of the Country apparently to curry political favour.”

"The politics of divide and rule being observed in the sharing formula adopted by the current head of NEMA which favours the North East of Nigeria is a direct affront to the Constitutional provisions banning discrimination".

“This deliberately skewed nature of favouring some victims of natural disasters and neglecting others because they do not share religious or ethnic affinities with the current DG of NEMA directly undermines the integrity of the national mechanisms for disaster management and control", says HURIWA.