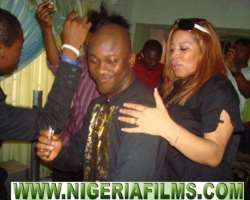 Several months after her marriage broke up, beautiful actress, Monalisa Chinda, has confessed that she is not happy being single again.
It will be recalled that her marriage to Dejo-Richard collapsed earlier in the year due to some irreconcilable differences.

In her weekend column in one of the popular newspapers, she made a veiled reference to the fact that she really wished that her marriage had not crashed.

She wrote that she never envisaged that she would be single after being married for some years.

According to her, love in a marriage is selfless and it must be understood by both parties.

However, the mother of one and writer, who emphasized her imperfections, urged other young couples to try and guide against such weaknesses, saying that marriage is one of the best institutions ordained by God.

In their reaction to her write-up at the weekend, many, who believe that she's now wiser, urged her to advise her colleagues to thread with caution in their marriages