Jonathan Was Evil, But Buhari Is Worse 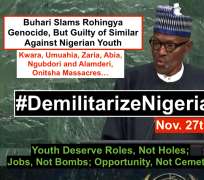 I believe I was one of the top five Nigerians who helped Buhari get elected.. Based on my role with my fiery articles, social media tools and thousands of personal dollars committed in various campaigns, I was one of a select few invited for Buhari's inauguration in May of 2015. However I had not yet left Nigeria when I first criticized the new president. In an article that went viral on LindaIkeji, July 1st of 2015, I condemned Buhari for changing his personal security while leaving the nation under the same wicked and murderous security chiefs [See: https://www.lindaikejisblog.com/p/2015/07/buhari-changes-personal-security-but.html ]. That was quite selfish and callous.

When it was exposed that Buhari plagiarized Obama and Charles De Gaulle's speeches, like many, I was quite disappointed. The fact that he failed to name and shame the perpetrators depressed me even more. Then when the nepotism at the CBN was exposed and it was clear that the shameless #CrookedGodwin Emefiele bribed Buhari, APC and the National Assembly to secure his official hold on Nigeria's finances in the interest of the cabal, it took all I had to control my resentment.

The placation of the masses with paltry N5000 for a lucky couple thousands did not help ease the regret in putting my weight behind this brazenly self-centered, corrupt new leadership.

When it was revealed that Buhari shielded and removed the names of CoAS Buratai and Dambazau from the military probe report, I froze. Revelations of Buratai's amassed property in Dubai and Nigeria that Buhari pretended were not in public domain, made me convulse.

Buhari's many policy blunders did not help matters, especially on the economy, including his economically plunging go-slow attitude in selecting ministers who ended up being more of the same shame. Seeing the same corrupt PDP party people flood his government made me question my judgment.

Removing the fuel subsidy, thus giving his government double the available cash the previous government had, but no visible improvements to show for it, was perplexing. Buhari, by removing the fuel subsidy sent food prices skyrocketing – a direct consequence of the doubled transport cost. I expected dividends from the government of that additional income it had taken as it imposed inflation and hardship on the populace. There were next to none.

I was quite loud in condemning Buhari's running of the FOREX subsidy scam in cahoots with #CrookedGodwin; the scam that according to former CBN governor, now Emir Sanusi, was making new billionaire cabal every day; and according to Reuters, was giving Dangote half a billion dollars extrapolated, in a year. The many severe economic terrors of Buhari that were aimed to enrich the cabal and further impoverish the masses, leading to the loss of millions of jobs, hurt extremely. His rush to sell off what was left of Nigeria's assets to the insatiable, ravenous cabal, totally disgusted me.

And then, when Buhari increased the tariff on calling home from abroad by 600%, I could only believe that he wanted to cut us off. His insulting statement in London, that Nigerians abroad were criminals, hit this home. Why would Buhari who spent half his term abroad too, but at tax payers' expense insult those of us abroad earning our decent living and remitting $33 billion home per year, without leeching on Nigeria as he and other officials?

Lies upon lies about the war against Boko Haram, including serial denials of attacks on the populace, confused and frustrated me. Why did this government believe it was in its better interest to protect their reputation against admitting the reality to the people in the best interest of our security?

Buhari's failures to keep his promises on restructuring and power devolution; on the presidential fleet, on health tourism, and many others, made me wonder who Buhari really was. A male chauvinist who believed women belonged in the kitchen, and a divider with his 99% vs 5% statements, Buhari also proved to be a religious extremist. How could I have missed this?, I banged my head.

When Buhari protected the looters, I was perturbed beyond measure. SERAP having to take him to court to force a judgement compelling him to release the list of thieves, was not a point I had ever foreseen. Buhari still adamantly protecting the list of thieves and till date, refusing to release the thieves list and terms of the deals was a breaking point for me. This was not the Buhari I fought to have in office. This man is a friend of thieves. Little surprise, Buhari till date has not locked up a single looter cabal. Rather they are being warmly welcomed into the APC party every day.

Defending Fulani militant herdsmen who had killed thousands and burnt villages worth billions, as not terrorists, brutally massacring Muslim and Igbo minorities and burying them in their hundreds, secretly in the middle of the Night, scared me. Who is this man? When Buhari defended Babachir Lawal, renowned for the #Grasscutter scandal–looting money meant for displaced Boko Haram victims, I cried. Again, when he obstructed justice against Ayodele Oke and wife involved in the $289 million scam of which $43 million was found stashed in the Ikoyi apartment, I shook in pain. Why fight to expel one corrupt and clueless ruler only to install another corrupt and this time, rather callous ruler? When will Nigeria get a leader and not an evil ruler? At this time I realized my error. I should have sat on the fence like Wole Soyinka and Sheikh Abubakar Gumi. I should never play God. Never support one evil man to expel another evil man. Only support good men, contest yourself or sit on the fence. Hold your vote! Do not vote! God will remove the evil man. It has been hard living with the fact that I helped install this person. Yes, Jonathan had to go, but perhaps if I sat on the fence and Jonathan won, the revolution would have happened by now. Never again shall I support or vote for a bad person. And lesson learned, now I am contesting for president, to do it myself.

When Buhari started reinstating the crookedly corrupt officials like Maina who Jonathan had dismissed, I buried my head in the ground like an Ostrich and peeked to see if it was not true. Then again I saw Buhari had reinstated Deputy Commissioner of Police, Ibrahim Danjuma, responsible for the Apo 6 massacre. It was then that I finally concluded that Buhari was more evil than Jonathan. State governments of the ruling party, like Kano, freeing men accused of killing a female trader were more nails in the heart. Combined with the paradoxical brutality, with governors and security officers competing to see who could beat up and lock up journalists and social activists the most gave me a headache. This 'divine' government with its 'another messiah' head saw the people as its enemy and is at war with us.

To fight these wicked, corrupt rulers and their coterie of cabal, we must retain our right to protest. Despotic regimes like that in North Korea and Turkey, suppress freedoms by clamping down on the inalienable right to protest. This is the point we have gotten to in Nigeria. Wherever youth protest, the Buhari government massacres them. It happened in Zaria, in Onitsha, in Abia, in Umuahia and the latest happened in Kwara state where youth protesting against a senator were killed in cold blood, no apology.

Monday, 27th of November, we are coming out and marching to government offices across the country and embassies around the world to demand Buhari #DemilitarizeNigeria.

I enjoin you all to join us.
They have looted our tomorrow's leadership.

They have looted our endowment.
We must stop them from looting our lives!
Dr. PerryBrimah.com; @CabalMustGo revolution, on WhatsApp: +1-929-427-5305 ; Follow @EveryNigerian on twitter or via Facebook.com/CabalMustGo