Actresses Get In A Fight Over Husband. 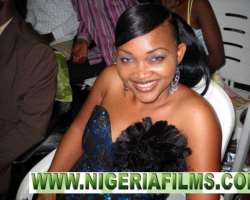 Bimbo Akinsanya is going overboard to address the stories of snatching fellow actress Mercy Aigbe's husband, Larry Gentry. Bimbo and Larry were said to have been seen at an event organized by theatre practitioners.They exchanged contacts, kept in touch – have been talking several hours on the phone ever since and making time to meet up for intimate affairs in secret locations and Mercy who is informed to be pregnant got wind of the affair and allegedly got across to Bimbo to warn her and eventually they got in a fight.

Bimbo Akinsanya claims to have saw Larry Gentry about five years ago and saw him just twice. She also claims to have never spoken to Mercy Aigbe and since, she hasn't been on set with Mercy 'lately and often' – she barely sees her [Mercy].

Bimbo Akinsanya, who is in relationship with a man whose identity she still refuses to disclose said she was informed of the affair with Larry by her man and “I asked when he heard it and he said about two weeks ago. I said why are you just telling me and he said because he doesn't believe it