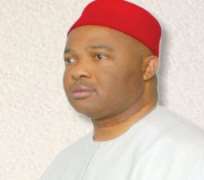 The Southern Senators' Forum has urged President Muhammadu Buhari to convene a meeting of the leaderships of the National Assembly, state houses of assembly, and governors.

The forum said the meeting would brainstorm and commence implementation of the 2014 National Conference report.

The Chairman of the forum, Sen. Hope Uzodinma, made the call in a communiqué he read at the end of a retreat of the organisation in Calabar on Saturday.

The retreat had the theme: “ National Unity and Restructuring''.

According to the chairman, the forum resolved that its members will liaise with their colleagues in the National Assembly to kick-start a legislative process that will ensure the implementation of the report.

He also said that the group urged the leadership of the National Assembly to bring up the report for consideration.

“After presentation of papers, contributions and general brainstorming, it was resolved that Nigeria and Nigerians have come a long way.

“As such, it has become imperative and in the interest of all to live together as one united family under one indivisible and indissoluble country with justice, equity and fairness.

“While the unity of Nigeria should not and cannot be compromised under any circumstance, it has become apparent that the foundation upon which Nigeria was built at independence in 1960 has been eroded.

“There is a need to return to the original dream of true federalism which was a product of negotiation, compromise and accommodation,'' he said.

The retreat witnessed presentation of papers from prominent Nigerians on various subject matters, including “Sustaining National Unity in a restructured Nigeria''.

Others are: “Provisions for National Unity in the 1999 Constitution (Amended), Between the Dreams of pre-Independence Nationalists and Restructuring: A Critical Look at the Past and Present, Imperatives of Restructuring in Multi-Religious Nigeria. (NAN)