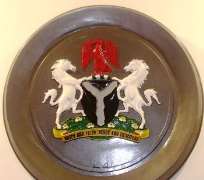 Nigeria has moved two steps upward among the competitive economies in the world, according to the latest ranking by the World Economic Forum (WEF).

Nigeria is now 125th out of the 137 economies that the ranking covers; it occupied 127th position in last year’s ranking.

This is the first time the country’s ranking has gone up since 2012, according to the WEF’s Global Competitiveness Report released on Tuesday.

The report, however, stated that the country’s macroeconomic conditions worsened, having gone 12 step-downward to 122nd position.

Inflation in Nigeria, according to the report, is high at 15.7 per cent. On this, the country is ranked 131st.

The report put Nigeria’s budget deficit at 4.4 per cent and ranked the country 99th in this regards.

“However, new prudential requirements have strengthened the banking sector’s soundness, and the Economic Recovery and Growth Plan (ERGP) for 2017–2020 contains much-needed reforms on transport and power infrastructure, the business environment, and education investment,” the report stated.

From the WEF ranking, Nigeria has only fared a little better than a few sub-Saharan African countries like Democratic Republic of Congo (126th), Burundi (129th), Sierra Leone (130th), Chad (135th) and Liberia (134th), while several other sub-Saharan African countries like Cameroon (116th), Ghana (111th), Gambia (117th), and Uganda (114th) are better off than Nigeria.

Mauritius and Rwanda, at 45th and 58th positions respectively, are ranked higher than South Africa (61th).

Switzerland maintains its number one spot as the most competitive economy in the world.

The 10 most competitive world’s economies are Switzerland, the U.S, Singapore, the Netherlands, Germany, Hong Kong, Sweden, the U.K, Japan, and Finland.

China and Russia are ranked 27th and 38th respectively.

WEF said this year’s report came out in the context of recovering global growth, but that many countries were still facing challenges such as disruptive inequalities; rising protectionism and a backlash against globalisation; and the challenges and uncertainties of the Fourth Industrial Revolution, with its innovation and technological change.

The report is produced annually from data obtained from leading international sources.