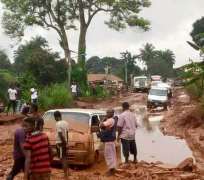 A facebook user, Phylis Treasured (Akpovoke) has taken the Delta State governor, Ifeanyi Okowa to the public dry cleaner over dilapidated road in Onicha-Ugbo, Aniocha north local government area of the state, over what he described as “wickedness”.

The facebook user, lamented that the ramshackle road is a major road in Onicha Ugbo, lamenting the area is located in the Delta North Senatorial District where the incumbent governor hails from but lacks government presence.

According to him, “Is this not wickedness? This is a major road in Onicha Ugbo Onicha Ugbo is located in Delta North where the governor hails from”.

He said “the people of Delta North should bow in shame that 2 solid years in office the governor cannot give adequate attention to his own people”, he regretted.

“This is the height of man's inhumanity to man. Okowa shud bury his ugly face in shame”.

One Godwin Utuedoye in his response to the post of Phylis said, “Interest differs. It depends on where his interest lies but the masses should be the best judge, Lolz”.

Another respondent, Treasure Chineze, said “He is not from onitsha ugbo”

Phylis Treasured then noted “But he is from Delta North”.