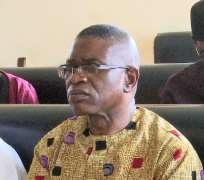 Trouble started for Abubakar, a former managing director of Nigeria Social Insurance Trust Fund (NSITF), and his co-defendants (some of whom were former board members and current staff of NSITF), when a whistleblower petitioned the EFCC accusing them of abusing their positions to divert public funds running to billions of naira.

Acting on the petition, EFCC operatives investigated the allegations and after thorough investigations were carried out, it was revealed that between 2012 to 2015 they received kickbacks in dollars in the discharge of their duties, and conspired to divert the about N18 billion, being contribution from the Federal Government of Nigeria as take-off grants and Employees Compensation Scheme (ECS) for Ministries Departments and Agencies (MDAs).

The said money was diverted into personal accounts by an e-payment mandate. The offence contravenes Section 311 of the penal code cap 532 LFN (Abuja) 1990 and punishable under Section 312 of the same code.

One of the counts reads:That you Umar Munir Abubakar “M" being the former managing director of Nigeria Social Insurance Trust Fund (NSITF), Henry Ekhasomi Sambo “M" being General Manager Finance (NSITF), Sir Adebayo Adebowale Aderibigbe “M" being General Manager Legal Department (NSITF), Chief Richard U. Uche “M" being a former board member of (NSITF), Aderemi Adegboyega “M" being a former board member of (NSITF) and Dr. (Mrs) Ngozi Olejeme “F" former board chairman (NSITF) (now at large). On or about 2012 to 2015 in Abuja within the jurisdiction of the High Court of the Federal Capital Territory, Abuja, while being entrusted with dominion over money belonging to the Nigeria Social Insurance Trust Fund (NSITF), dishonestly converted to your own use the sum of Eighteen billion naira (N18,000,000,000), being contribution from the Federal Government of Nigeria as take-off grants and Employees Compensation Scheme (ECS) for MDA’s. The said sum was diverted into personal accounts by an e-payment mandate jointly signed by Umar Munir Abubakar and Henry Ekhasomi Sambo and thereby committed an offence contrary to Section 311 of the penal code cap 532 LFN (Abuja) 1990 and punishable under Section 312 of the same code”.

The accused persons pleaded “not guilty” to the charges preferred against them.

In view of their pleas, counsel to the EFCC, Steve Odiase, urged the court to fix a date for trial and to remand them in prison custody pending trial.

However, counsel to the defendants, J. K Kolawole, Napoleon O. Idenala, J. A. Kalu, J. C. Njikonye and Obafemi Adewale, applied for the bail of their clients, and prayed the court to grant them bail on liberal terms.

After listening to the arguments, Justice Orji granted them bail.

“Each of the defendants is admitted to bail in the sum of N50 million with two sureties in like sum,” the judge ruled, adding that the two sureties should be residents in the Federal Capital Territory, Abuja.

He further ruled that one of the sureties must be a civil servant of at least the level of a director, and warned that anyone who failed to fulfil the bail condition, “shall be remanded in prison custody”. They were also warned not to leave the country without the permission of the court.