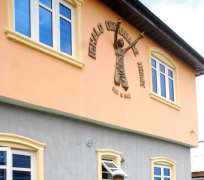 Super Eagles striker Odion Ighalo has set aside Saturday, December 16, 2017 as the date for the launch of his new orphanage in Lagos, 90Minutesgoal.com reports.

"Yes it's all set and the launch date is 16th of December 2017 you are all invited,” Everyone is invted as we add value to the lives of the less privileged", Ighalo told www.90minutesgoal.com .

The building is a one-storey building with artwork in the front of the top floor depicting Ighalo in his traditional goal celebration of kneeling down and raising his hands to the heavens. ‘God is able’ is boldly inscribed under the image of Ighalo.

There is what looks like another one-storey building behind the main one, both looking big enough to comfortably accommodate scores of children.

The orphanage is located in Ijegun, a relatively newly developed, but highly populated part of Lagos in the Ikotun area, where there is not much affluence.

Ighalo helped the Super Eagles secure the sole ticket in Group B for the 2018 FIFA World Cup in Russia.

See photos of the House below