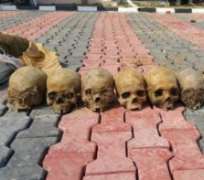 The Nigerian army says it recovered cache of arms and seven decomposed human skulls after it raided a militant camp in Omoko, Ogba-Egbema-Ndoni local government area of Rivers State.

Spokesman of 6 division in Port Harcourt, Aminu Iliyasu, told reporters on Tuesday that five males and two females were arrested at the camp.

According to him, the raid is part of a renewed strategy by the division to restore law and order in Omoku which has been terrorised by criminals for long.

“On Monday, we received a tip-off, and thereafter, troops raided the camp and shrines of a notorious militant, cultist, kidnapper and an ardent oil thief popularly known as Don Wanny,’ he said.

“After about an hour of a gunfight, our troops overpowered the criminal elements due to superior firepower that sent the criminals scampering for safety.”

Iliyasu said some of the alleged criminals, who sustained gunshot wounds escaped by jumping into Orashi River in the area.

“However, seven of the suspects including two ladies were arrested, while they attempted to escape in the encounter that occurred at about 2:35 a.m. on Monday,” he said.

“It is believed that the main culprit, Don Wanny was not at the location during the encounter but concerted efforts are on to track, arrest and bring him to justice.”

Iliyasu thanked residents of the area for cooperating with security agencies and urged them to continue to provide timely information that would lead to the arrest of criminals in the state and its environs.