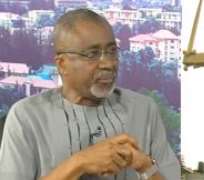 The senator representing Abia South Senatorial District, Enyinaya Abaribe, has filed an application before a Federal High Court Abuja, requesting that the court compels the Chief of Army Staff to either produce the leader of the Indigenous People Of Biafra (IPOB), Mr Nnamdi Kanu, or pay the bail bond attached to his release.

Abaribe is also asking the court to order the COAS to offset all expenses he incurred in the cause of Nnamdi Kanu's trial.

The lawmaker is also demanding an order for payment of damages to the tune of 10 million Naira to him for the psychological trauma which he says he went through, following the extra-judicial self-help actions of the Army Chief of Staff.

Senator Abaribe is standing as surety for Mr Kanu, whom he signed a bail bond of N100 million to secure bail for.

On October 17, the trial judge, Justice Binta had ordered that Abaribe and the other sureties appear before her to show cause why a bench warrant of arrest should not be granted against them and that the lawmaker can only be excused if he produced Mr Kanu or be to ready to forfeit the 100 million naira bail bond.

Abaribe predicated his application on the grounds that “out of patriotic consideration of assisting the judicial process to defuse the tension generated in the polity and with full belief that Mr Nnamdi Kanu was carrying on his activities within the limits and confines of the constitution of the federal republic of Nigeria, he offered to stand as surety for Mr Kanu.

He added that all attempts and efforts by him to contact Mr Kanu by whatever means had failed completely and that nobody except the Army can give any account of him.