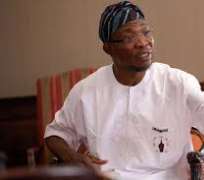 The State Government of Osun has called on students in the state owned higher institutions to handle their reservations on the increase in some fees payable in their institutions with maturity, sense of responsibility and reality of the situation at hand.

This is in reaction to the protect of the students which rocked Osogbo, the State capital early today.

A statement by Mr Adelani Baderinwa, the state Commissioner for Information and Strategy restated that government has not increased the tuition fees reduced by Governor Rauf Aregbesola in 2011.

According to the statement, the state government has not authorized any increment in tuition fees in its higher institutions as only ancillary fees were increased by authorities of the said institutions based on considerations.

The commissioner noted that the government is committed to maintaining status quo with the fees reduced six years ago.

The statement said “As at today, the tuition fees of Osun State Polytechnic, Iree and the College of Technology, Esa-Oke remain N25, 000 while that of Osun state College of Education, Ilesa and Ila-Orangun is still N20, 000.

“It is pertinent to remind the people that the Aregbesola government, at its inception and without being persuaded in 2011 reduced the tuition fees of all the state owned tertiary institutions from N45, 000 to N25, 000. Since the reduction in 2011, the government has not put a penny on the tuition fees.”

“Government wishes to state that the managements of the tertiary institutions are at liberty to fix extraneous fees and are responsible for its regulations; it insists that tuition fees are yet to be increased."

Government of Ogbeni Rauf Aregbesola reiterated its commitment to promoting functional and affordable education, the manifestation of which is the improvement in the standard of education in the state.

The State Government however, called on the students to be peaceful and orderly in their protest and not allow it to be hijacked by miscreants and political jobbers who are looking for such avenue to unleash unpleasant experiences on the people.