Why Fulani herdsmen won't accept ranching laws being enacted by some states: Miyetti-Allah 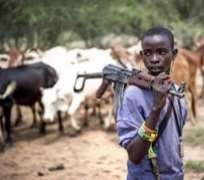 THE Fulani in Nigeria have said they will not accept cattle ranching because the country's geographical location was not suitable for it. It's caused by strangers fuelled by politicians, religious leaders – Miyetti Allah Besides, the Fulani said the species of cows they had, as subsistence livestock farmers, were not good for ranching in the country, saying they could only be confined to ranching if their livestock were replaced with breeds suitable for it.

This was even as they said the anti-open grazing laws being established by state governments would die a natural death like 'political sharia law' in Zamfara. According to them, the laws are being used as campaigns by some people to win votes in 2019 elections.

Addressing newsmen, yesterday, in Abuja, through their socio-cultural association under the aegis of Miyetti-Allah Kautal Hore, the Fulani insisted that events in history showed that ranching was not practicable in Nigeria and to this end, urged the Federal Government to immediately stop state governments from enacting anti-open grazing laws.

National Secretary of Miyetti-Allah Kautal Hore, Saleh Alhassan, who read the association's prepared speech to newsmen at the event, called on the Federal Government to stop state governments, especially Benue and Taraba states, from going ahead with implementing the laws.

He said: “The whole experiment of ranching in Nigeria is a total failure, you can google it, it's there on the Internet for everyone to see. “ Right from the 70s,the old Gongola State had experimented ranching, the same with Kaduna State and even the old Plateau State. All the ranches collapsed because the geographical location of this country is not suitable for ranching.

“In places where there are successful ranching in the world, the volume of rain per annum in those areas is at least four to seven months, that's why you have grasses that can naturally be sustained. At the same time, you must have the necessary breeds that will support even ranching. The current breeds we have in this country cannot be supported by ranching.

“Anywhere you keep these volume of cows we have now, for two weeks, they will eat out everything and you will have ecological disaster, “he said.

Alhassan said the purpose of the briefing, coming barely a week after the previous one, was to further reassert the position of the Fulani on the anti-grazing laws enacted by state governors and their opposition to it. He said: “ We view the anti-grazing law as an agenda to destroy our means of livelihood by visionless and desperate politicians.

“Anti-grazing laws are nothing but populist agenda designed by visionless and desperate politicians to destroy our means of livelihood. This dangerous gambit must be nib in the bud by the federal government through the security agencies as it portends great danger to the cooperate existence of the country.

“These laws are oppressive and negative and are fundamentally against our culture as Fulani pastoralists, against our economic interest and against the constitution of the Federal Republic of Nigeria. “ It is important to note that inter-state movement of pastoralists is similar to inter-state commerce and it is only the National Assembly that can legislate on that aspect as captured in item 62 of the exclusive legislative list. So no state governor can decide to stop movement of pastoralists because that is their own form of commerce. So, they have gone against the constitution.

“The laws do not take into cognisance our sociology, our economic interest, our production patterns, climate variations and factors that pushed pastoralists into these migrations. These migrations are not picnics, they are detected by ecological needs. It is a common knowledge that the primitive form of agriculture practiced in Benue and Taraba states and indeed all over the country, is not consonant with global best practices.

Alhassan insisted that Benue State government breached the constitution by stopping open grazing, given that the River Benue Basin, its tributaries and lakes were under the control of the federal government. Again, very fundamentally,the River Benue and the tributaries and also the international routes and roads that pass through Benue don't belong to Benue State Government, they belong to the Federal Government. Benue State Government has no jurisdiction over River Benue, its tributaries, the lakes, the river basins, they are all federal government's. So how do you now start to legislate to say 'you are going to stop access to those natural resources?' “Between January and and early May,is when pastoralists move to the river basins because that is the peak of dry season and most of the rivers pastoralists use to water their animals dried up and they now move towards the River Benue.

“So designing a policy that will exclude the herders completely is wrong, what they should have done is to have restricted areas for the herders and then give them access to grazing corridors and watering points during those peak periods of dry season. As cultivation comes up during the rainy season, these people naturally migrate northwest. So, it's detected by climatic changes. That's why we are saying it's not possible, the law will not work because it's not well thought out.

“Then for you to create a ranch, the environmental impact assessment must be done on the areas earmarked for the ranch, and it must not take a minimum of two to three seasons. That's to say you must do studies during the wet season, do studies during the dry season and then repeat it so that you compare before you can say this place is suitable for a ranch. “So ranch is technologically driven, it's capital intensive and it's not practicable for this kind of subsistence farmers we have, the livestock farmers are subsistence farmers. It's just like saying nobody will cultivate his land if he doesn't own a tractor, so how many people will go to farm? “ So, it's not that we don't want to respect law and order but when you make an impossible laws, then you are not creating peace.

You are either deliberately attempting to provoke conflict for either political reasons or you are being hoodwinked and deceived by desperate political advisers just probably because they want to get money out of you, they make you create laws that will create conflict.”

Hore scribe continued:”In particular, the Benue Valley which has been causing problem in land resources, we have issue of population and nature and pattern of settlement. It's not just the herders that can be blamed for it. If you look at it typically, the Tiv people have the culture of nomadic farming, if they farm this year here, the next year they move to another location and their culture of reproduction is such a manner that it has made useless of land tenure system.

“ There's no Tiv farmer that will tell you that 'we have a family land' because of the fragmentation of the land, because of the number of children they have, they cannot inherit any parcel of land. So they now straddle along communities in the Benue Valley and neigbouring states' lands belonging to other communities and fallow lands that pastoralists use for grazing, they will cultivate them in a very extensive primitive manner, occupying large hectares of land.

“If they cultivate here this year, the next year, they move to other places. That is why they have problem in Nasarawa border communities, they have problem in Taraba border communities. All those areas are extensively being cultivated, there is no mechanization any where, and there's no modern farming. So, with the pressure on the land resource, if you want to address it, you cannot just single out the herders and say 'they must be kept in one place without making any provisions for them.'” According to him, the anti-open grazing laws were being targeted at Fulanis and their livestock.

“And these laws, if you look at them, they are targeted at the pastoralists because one, you have not provided any space for them and you ask them to go and buy land to create ranches when the context of the law you created, you have already poisoned the minds of the people that own the land, that you are creating this law because of the crisis that is in place. So who will allow anybody to have access to the land?

“So our point is that if the government is serious, they should make land available to us after all, the Land Use Act vests lands in the hands of state governors. So they should give us land so that we can practice our occupation.” He said contrary to beliefs in some quarters land trespass has been the source of Fulani and farmers crisis in Benue, it was rather cattle rustling, youth unemployment and what he called rural banditory, wondering why there was pending cases of land trespass in any law court in the state. “I challenge the Benue State Government to tell us how many court cases that have to do with trespass on land are before the courts in Benue? Or is it that they don't have faith in the judiciary that they don't take cases there?

“So, it's not a question of trespass on land, that's just the truth. I want people to understand that these conflicts we are having year in and year out, the major drivers are not on trespass on land. Rather, the drivers are cattle rustling, rural banditory, youth unemployment and desperate politicians that want to create crisis so they can sustain themselves in power, “he added.