How the U.S. military could soon have a new way to crush North Korea's ICBMs 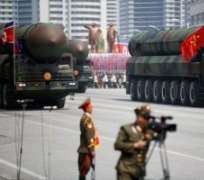 A US military upgraded Exoatmospheric Kill Vehicle, or EKV, a kinetic-force weapon that slams into its targets, destroyed an intercontinental ballistic missile for the first time during a Missile Defense Agency test of the Ground-based Midcourse Defense system several months ago.