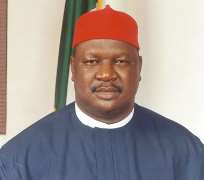 THE Economic and Financial Crimes Commission has confirmed the arrest of Anyim Pius Anyim, a former secretary to the government of the Federation.

Wilson Uwujaren, spokesman of the commission, said on Friday, November 17, that Anyim was being held over an “ongoing investigation.”

The former Senate president was still at the EFCC headquarters in Abuja as at press time.

Report said that Anyim was being questioned for his role in the alleged mismanagement of ecological fund while in office as SGF, among other matters, our source said.

While serving as SGF in 2012, Anyim was linked to shortfalls of about N396 billion in the Ecological Funds deductions.

Subsequently, he was invited by the Senate Committee on Special Duties and House Committee on Environment to provide details of how money for the Ecological Fund office was spent but he never showed up in any of the committees.