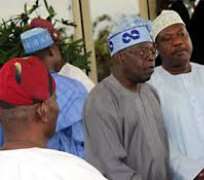 The former President, Dr. Goodluck Jonathan has replied the National leader of the All Progressives Congress, APC, party, Asiwaju Bola Ahmed Tinubu, who had, during his address at the presentation of a book titled, “Making Steady Sustainable Progress” authored by President Muhammadu Buhari's media aides at the Old Banquet Hall, Presidential Villa, Abuja, accused his(Jonathan's) administration of institutionalising corruption in Nigeria.

Puting Tinubu in proper perspectives, the former president who spoke through his former aide and bestselling author, Pastor Reno Omokri, said that under his administration, the only global body for monitoring corruption, Transparency International, had published in its annual corruption index, showing Nigeria made an eight(8) points improvement in corruption reduction, haven moved from 144 to 136 then. The statement also said that, “other than media sensationalism, there have been no convictions of financial misappropriation stemming from the Jonathan era.”

The statement also challenged Tinubu or anybody in APC to counter Jonathan's statement in 2014 that he has no bank account abroad. Jonathan, in the statement said Tinubu mistook what he described as the “Usain Bolt speed” at which the current ruling APC government smuggled back into the country, the embattled former Chairman of the Pension Reform Task Team ( PRTT), Abdulrasheed Maina whom the previous government under Jonathan had dismissed and declared wanted, only for the APC-led government to reinstate him, even with a promotion, for what he said is the “unproven claims of corruption under Jonathan.”

The statement reads thus: “Again my attention has been drawn to disparaging comments made by Mr. Bola Ahmed Tinubu against former President Goodluck Jonathan and his administration. In the said comments, Mr. Tinubu said “The prior government used the public treasury as a private hedge fund or a charity that limited its giving only to themselves,” he said. “So much money grew feet and ran away faster than Usain Bolt ever could. That which could have been spent on national development was squandered in ways that would cause the devil to blush.” Speaking further, the former Lagos State Governor said: “Boko Haram would have taken more territory and more lives would have been lost to insurgency if Jonathan had remained in power.”

I would now address these allegations point by point using verifiable facts. First of all, the only global body for monitoring corruption is Transparency International which releases an annual Corruption Perception Index. It is a fact that Nigeria made her most improvement in Transparency International's annual Corruption Perception Index In 2014 under President Jonathan when we moved from 144 to 136 representing an improvement of 8 points. Transparency International observed the Jonathan administration's fight against the corruption in Nigeria's fertilizer procurement regime, the use of technology to remove 50,000 Federal ghost workers and the speed at which the then President fired ministers accused of corruption or conflict of interests.

From that time till today, Nigeria has not made any improvements and has remained at 136 where Jonathan left us because Transparency International deals with facts, not opinions or media trial. Other than media sensationalism, there have been no convictions of financial misappropriation stemming from the Jonathan era. However, we do know that it is a fact that the allegedly corrupt pension thief, Abdulrasheed Maina, was dismissed and declared wanted by the Jonathan administration. We also now know that it is a fact that the present Attorney General of the Federation, Abubakar Malami, met with Maina in Dubai.

We know that Maina's family revealed in a press conference that Maina was invited back to Nigeria by the present government. It is also a fact that Maina was recalled, reinstated and given double promotion by the current administration. Moreover, we know from the Head of Service's leaked memo that President Muhammadu Buhari was aware of this entire saga. Perhaps Asiwaju Bola Tinubu mistook the Usain Bolt speed at which Maina was smuggled back into the country and reinstated for the unproven claims of corruption under Jonathan. We also know that it is a fact that $25 billion worth of contracts were awarded at the NNPC without due process.

It is also a fact that this is the highest ever such amount involved in Nigeria's history. Again, perhaps it is this amount that Tinubu meant when he said “So much money grew feet and ran away faster than Usain Bolt ever could”. Or perhaps he was referring to Babachir Lawal. Nigerians should note that on the 7th of March 2014, then President Jonathan said “I am loyal to Nigeria's economy. I don't have accounts or property abroad.” Till date, nobody has been able to contradict that statement because it is true.

Can Bola Tinubu or anybody in the APC leadership make a similar claim? On the issue of Boko Haram and terrorism, it is a fact that there is only one global body recognized to monitor terrorism and that is the Institute for Economics and Peace (IEP) which releases the annual Global Terrorism Index. It is a fact that between 2013 and 2014, Nigeria under President Jonathan was unfortunately listed as the fourth most terrorized nation in the world. However, in the latest Global Terrorism Index released yesterday (November 15, 2017) by the Institute for Economics and Peace, Nigeria has deteriorated from where Jonathan left it and is now the third most terrorized nation.

In 2015, President Jonathan ensured that elections held in every local government in Borno states, but last month, the United Nations declared that they could no longer operate in certain local governments of Borno state. So who is fooling who? So if according to Transparency International, Nigeria was less corrupt under Jonathan than it is today and according to the Institute for Economics and Peace, Nigeria is more terrorized today than it was under Jonathan, it becomes clear that Bola Tinubu has no factual basis to make the claims he made.”