We Demand Unconditional Release Of Our Son”, Group Tell FG 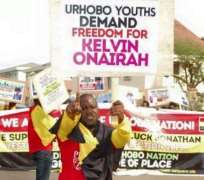 The Coalition of Urhobo Nation Young Leaders and Stakeholders (CUNYLS), has demanded the unconditional release of Kelvin Onirah a Niger Delta Activist detained over his quest of advancing the unjust marginalization of the Urhobo nation by the Nigeria state.

The group which is made up of Urhobo Progress, Pride of Place and Self Determination Movement, in a press release signed by Comrade Rex Ekiugbo Anighoro, a right activist and Convener, demanded freedom for Onirah, like other ex-agitators granted amnesty by the federal government.

The group which recently stage a protest to Abuja, Nigeria federal capital, also urged authority to as a matter of urgency revisit the celebrated extra Judicial murder of late Chief Ogbe Onokpite, a prominent Urhobo Young Adult whose murder seven years ago in Warri, Delta state and bring perpetrators to justice.

Their statement reads in part: “That we demand freedom for Kelvin Onirah who as a Niger Delta Activist engaged in pursuit for advancing Urhobo and Niger Delta greater good just like many other Niger Delta Agitators who presently are walking free.

“We demand an unconditional release for him as we believe it will aid the cause of peace and integration in the region for the good of the Nigerian Union.

“We call on all Urhobo leaders in the different Political Parties especially our distinguished representatives at the Red and Green Chambers of the National Assembly to step into this matter.

“We call on all Urhobo leaders in the Urhobo Progress Union (UPU) to rise up to pursue freedom and justice for these two Urhobo sons irrespective of perceived and alleged shortcomings.

“We call on Festus Keyamo, all Urhobo human Rights activists, all Urhobo Senior Advocate of Nigeria (SAN), all Urhobo Journalist and Media practitioners amongst others to stand up for this common cause.

“We call on all Urhobo Youths and young adults to rise up and champion this struggle. It could be you or your loved one tomorrow. An injury to one is an injury to all”, the statement added.