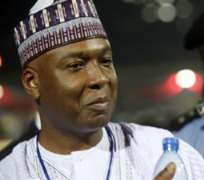 The approval followed presentation of report by Sen. Shehu Sani, the Chairman, Senate Committee on Local and Foreign Debts.

Presenting the report, Sani said the Committee in its findings discovered that the terms and conditions of the loan were favourable and do not pose any compromise to the integrity, independence and interest of Nigeria and its citizens.

He said “the projects are essential for rapid economic and social development of Nigeria. And that the projects, when completed, will create jobs through a chain of economic activities.”

He added that the three billion dollars for refinancing the nation's domestic debts would not lead to any increase in public debt portfolio, noting that it would however, reduce the cost of the debts.

Some of the lawmakers, however, expressed concern over the rising debt profile of the country.

They cautioned against frequent foreign loans, arguing that it could have adverse effects on the economy in the event of depreciation of the national currency.

Yusuf Yusuf (APC-Taraba) said there would be problem generating enough foreign exchange to pay the foreign debts in the event that the exchange rate got to N500 to a dollar.

In his remarks, the Deputy President of the Senate, Ike Ekweremadu, who presided over plenary, said “this Senate will continue to partner with Federal Government in matters that concern the ordinary people of Nigeria.

“The implementation of the 2017 budget is key because any appropriation act that is not implemented is worthless.

“So, whatever needs to be done to be ensure that the budget is implemented will always have the support of this Senate.

“Since this is tied to the implementation of the 2017 budget, I believe that informed the support that this request is now generating.

“We need to urge the Debt Management Office to ensure that our debt profile is monitored so that we will always ensure that it is within acceptable limit.” (NAN)