Anambra State Traditional Rulers’ Council – Astrc A Comminique Issued At The End Of The Monthly Council Meeting Of Tuesday, November 14, 2017, On The Governorship Election Of Saturday, November 18, 2017. 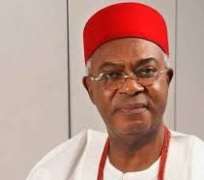 ​Having regard to Council’s position on Political Power Zoning in Anambra State as conveyed in aCommunique it issued in the Sun Newspaper of June 22, 2017, to that effect and to another Communique that enjoined Ndi Anambra to ignore the call from some quarters for the boycott of the November 18, 2017 Governorship Election, Council at its November 14, 2017 meeting deliberated extensively on the forthcoming Governorship Election among other important issues and resolved as follows:

1. Those eligible and registered voters in Anambra State should dust-up their Permanent Voters Cards -PVCs and get ready to cast their votes on November 18, 2017.

2. That in doing so, they should make sure that their votes are given to the candidate who is most suitable to cater for the interests of the people and should not allow themselves to be persuaded against their will, wish and conscience, for immediate gains.

3. That the electorate should conduct themselveslawfully, orderly and peacefully in casting their votes for their preferred candidates and ensure,also in a lawful, peaceful and orderly manner that their votes count and are seen to count.

4. That the electorate should also ignore any call from whatever quarters for whatever reasons,for the boycott of the election – Anambra State is the Light of the Nation and Must Show Good Examples Always. Election boycottsimply for the sake of it, is certainly not an exemplary behaviour.

5. That Anambra State Traditional Rulers’ Council – ASTRC stands on its established position on Political Power Zoning in the State, by which Council endorsed Governor Willie Obiano for another four (4) years in the office, March 17, 2018 – March 17, 2022; after which power should rotate, to Anambra South Senatorial Zone, for another eight (8) years, and rotate to the Central Senatorial Zone for yet another eight (8) years, in a pocket-friendly, peaceful and seamless cycle of transition/rotation.

6.​Council commends and congratulates all the candidates and their political parties for the level of order and peace that the electioneering campaigns have witnessed so far and enjoins them to sustain the tempo, during and after the election and announcement of the result.

7.​Council further enjoins Anambra youths to continue to conduct themselves in a very lawful, orderly and peaceful manner, as they have done so far and to resist any temptation to be used, either to scuttle the election or carry-out any acts that may lead to the breakdown of law, order and peace in the State. It is their future that is at stake and the time to protect this future is NOW.

9.​Council appeals to and enjoins all Traditional Rulers, Elders, the Clergy and all men and women of goodwill in Anambra State to raise their voices, anywhere they are in support of lawful, orderly and peaceful conducts by ndi Anambra and equally raise their voices against any acts likely to lead to the break-down of law, order and peace-before, during and after the announcement of the result.

10. Finally Council strongly states with deep concern and outrage by the disdain with which the Chief Security Officer and the ADC of His Excellency, Governor Willie Obiano, were withdrawn barely seventy two hours before the governorship election of November 18, 2017.

Anambra State Traditional Rulers Council – ASTRC and indeed the entire Ndi Anambra condemn unequivocally this ugly, sad and calculated development which puts the life of our son, the sitting Governor and indeed the Chief Security Officer of our State at risk; particularly at a time like this. We therefore call on all government agencies and institutions responsible for this unfortunate, anomalous and premeditated act to immediately restore the Chief Security Officer and the ADC of the Governor.