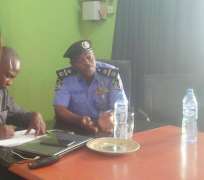 The Assistant Inspector General, AIG, of Police in charge of Ondo, Oyo, and Osun State, Mr Agboola Oshodi- Glover, has called on journalists in the state to support the command in combating crimes.

Glover made this known in Osogbo, Osun State capital, during a familiarization visit to the correspondents' chapel of the Nigerian Union of Journalists, NUJ.

He said that Journalists are powerful allies of the police and their support is needed to checkmate crime.

According to him, "Information is strategic to the operations of the police in fighting crime in the society.”

He said this would further help in the area of community policing and also strengthen the fight against crime.

In his reaction, the Chairman of the correspondents' chapel, Mr Hameed Oyegbade, thanked the AIG for the familiarization visit and promised that the chapel would work with the police in the area of proper information dissemination.

Oyegbade however, urged Glover to find lasting solutions to some spots in the state where crime are more prone to occur.

He also implored the AIG to checkmate the activities of some bad eggs within the command in order to make Nigeria police friends of the society.