LAGERBACK IN RACE AGAINST TIME 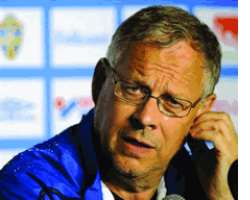 Lars Lagerback
Super Eagles gave Nigerians something to cheer ahead of the World Cup in South Africa with an improved performance in Sunday's 1-1 draw against Columbia, in the team's second tune-up match, after the unconvincing display against Saudi Arabia on Tuesday last week.

Although the new technical adviser, Lars Lagerback, came up with his final list of 23players for the World Cup campaign early in the week, the Swede knows that he still has a lot to do, in barely one week, to get his team ready to face Diego Maradona's sophisticated 'army' on June 12 when Nigeria confronts traditional foes, Argentina, in Group B's opening fixtures.

'This is a big improvement from the last game. I have only trained this team seven times and they have shown good quality. The team will do better when they play more games' an impressed Lagerback remarked after Sunday's match against Colombia.

Rabiu Afolabi and Dele Adeleye were better composed in the central defence against Columbia than Joseph Yobo and Danny Shittu who were anything but impressive in the match against the Saudis.Although included in the final squad for the mundial, Yobo and Shittu's fitness level has been of great concern to analysts and soccer fans.

Captain Nwankwo Kanu and John Utaka, both of relegated Portsmouth of England, left no one in doubt that they too lacked fitness for the challenge in South Africa. Against a colourless Saudi Arabia, Kanu could no longer reproduce the magic he was noted for. Each time the two-time Africa Footballer of the Year tried to show his stuff, he ended up losing the ball to the younger and fitter Saudis, as his wobbly legs could no longer interpret the immense skills in his brain. John Utaka was a more pitiable sight as he put every foot wrong. Playing from the left flank, as against the more familiar right wing, made matters worse for him.

Yobo and Shittu were too heavy and flatfooted in the central defence. But for the inexperience of the Saudi Arabian strikers and the magnanimity of the referee who turned blind eye to one or two penalty appeals during the match, the story would have been different.

Nigerian ex-international and former Orlando Pirates of South Africa goalkeeper, Willy Okpara, could not hide his disappointment over the Super Eagles' poor showing against the Saudis. Okpara, who was a guest analyst in SuperSport Satellite Television, berated the Lagerback boys for failing to live up to the rating of Nigeria in the round leather game.

'I cannot believe that the team I am watching is the Super Eagles of Nigeria, the pride of African football. Granted that this is the first time the team would be playing under the new coach (Lars Lagerback), I still expect them to show class over the Saudis because Nigeria and Saudi Arabia are not in the same class in the game of football,' Okpara said at half time during last Tuesday's match.

'Even if they cannot score against the Saudis, I expect the Super Eagles to hold on to the ball and string a number of passes before the Saudis can collect the ball from them,' he added.

Okpara was more pained that the Nigerian team could only manage four attempts at goal throughout the match, its best chance being the shot by Haruna Lukman in the last quarter of the encounter, which the Saudi goalkeeper spilled. Unfortunately, none of the Nigerian strikers was in sight to score from the rebound.

Kudos must, however, be given to the former Flying Eagles' captain for the manner he impressed in the Nigerian midfield both in game against Saudi Arabia as well as the match against Columbia. While the notable strikers failed to deliver in both games, the Monaco of France rising star rose to the occasion against the Columbians with his well targeted canon shot from about 30metres that gave the Super Eagles a nerve-suiting equalizing goal.

Nigerians, however, want to see how Largerback would come up a disciplined defence that can withstand the dreaded Diego Maradona-tutored Argentine attack that parades the world's best player and Barcelona of Spain talisman, Lionel Messi, Gonzalo Higuain of Real Madrid, Manchester City of England dimensional forward, Carlos Tevez, and Inter Milan of Italy clinical finisher, Diego Milito among other notable world-class players.

Meanwhile, Maradona has been spitting fire and brimstone, saying 'it would be a sin if I fail to adopt an all-attacking strategy at the World Cup with the calibre of players I have in my squad.

'We shall fight. I have a team that is as good as the Argentine squad that won the World Cup in 1986. And if we play the way we should, we can go all the way back to glory,' Maradona predicted.

President Goodluck Jonathan, the Nigeria Football Federation and the Super Eagles' players, had all expressed confidence in the ability of Lagerback to guide Nigeria to a successful outing at the World Cup in South Africa. But the big question remains, will the Swede tactician win the race against time as he has barely one week to fine-tune his squad for the big challenge in South Africa?