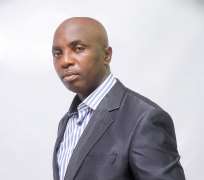 Among early visitors to General Sani Abacha when he became the military Head of State on November 17, 1993, was a controversial lawyer, businessman and socialite based in Lagos, Fred Ajudua. Pictures of the meeting made the front page of every newspaper the next day. Major Hamza Al-Mustapha, Abacha’s extremely powerful Chief Security Officer, and the entire Directorate of Military Intelligence (DMI) were incensed. Consequently, they arrested the person responsible for the meeting, and later detained him at the notorious DMI facility at 2, Child Avenue, Apapa GRA in Lagos.

General Fred Chijiuka, Director of Army Public Relations, arranged the visit. Chijiuka had grown close to Abacha during Abacha’s relatively long tenure as the Chief of Army Staff. So, he exploited his closeness to the new Head of State to arrange the visit by Ajudua who hails from his Ibuzo town in Oshimili Local Government Area of Delta State. As could be expected, General Chijiuka was shortly retired from the army. The Chijiuka unpleasant experience shows that every leader in the world cares about the kind of persons he associates with publicly, whether in politics or any other endeavour.

When news filtered in that President Muhammadu Buhari had on October 13 granted audience to the controversial governorship candidate of the All Progressives Congress (APC) in the November 18 2017 election in Anambra State, Tony Nwoye, eyebrows were raised across the country. Were Buhari’s intelligence officers, who presumably gave clearance to the meeting, satisfied with Nwoye’s profile? Were they impressed with the circumstances which made Nwoye, who was a student at the University of Nigeria Teaching Hospital in Enugu, end up in the newly established and little known Ebonyi State University? If a person seeking high public office in the United States who began his or her higher education at, say, Harvard but ended up in a community college, Americans are bound to ask questions. If the candidate belongs to the same party as the President and wants the President to campaign for him or her, it is the more reason why the President will have to ask questions.

High public office is a public trust. This is why Barrack Obama faced two major challenges when he was seeking to be the American President in 2008. The first was the fact that he chaired the board of the Chicago Annenberg Challenge which was somewhat associated with Bill Ayers, a radical professor who participated in bombings around the United States in the 1960s when Obama was only eight years old. The second hurdle was Obama’s membership of the Trinity United Church of Christ whose pastor, Jeremiah Wright, once said that African Americans should not recite “God Bless America” but should rather sing “God Damn America”. Though Obama was not in the church when Wright made the declaration, he was severely criticized for being a congregant there.

Obama did everything possible to wriggle out of the controversy of his so-called association with Professor Ayers and his membership of the Trinity United Church of Christ. The lesson in all this is that every candidate for elective office, let alone a sitting president, must be careful with those he is seen with in public. As the common saying goes, “show me your friends, and I will tell your character”.

In view of all this, most Nigerians were not comfortable to know that President Buhari received the Anambra State APC candidate in State House a little over a month ago. To worsen matters, Buhari was reported as saying that he would attend the APC gubernatorial campaign in the state. We thought that Buhari was misreported or was saying some public relations stuff, that is, something he did not mean but just uttered to keep a controversial fellow party man happy. After all, the President did not attend the APC gubernatorial campaign flag-off in Onitsha on October 21.

Yet, rumours have in the past few days been suggesting that Buhari will attend the APC campaign in Awka on November 15. If the rumours are eventually confirmed, then something has fundamentally gone wrong in Buhari’s presidency. It means that Buhari’s handlers are not keen on protecting the president’s integrity any more. Personal integrity remains Buhari’s only asset, but it has in recent months been savaged. The secret return to the country of the fugitive Chairman of the presidential committee of pension reforms, Abdulrasheed Maina, and his re-absorption into to the civil service and subsequent promotion to the rank of director are the latest in a series of scandals which have been eroding public confidence in the Buhari administration.

Buhari has not visited the South East geopolitical zone since he assumed office on May 29, 2015. This fact helps fuel the notion that he hates the South East. If his first visit to this zone in over is just raise the hand of a controversial party candidate, then, his handlers have lost it completely. Mark you, he is not coming to inaugurate a rail line between the East and any other part of Nigeria or to flag off natural gas pipelines in the area to enable the people to build heavy industries or to establish a seaport or to start the long-awaited construction of the Second Niger Bridge or the reconstruction of any of the several failed expressways in the South East.

Ironically, last December 22 when Buhari was attending a South East security and economic summit in Enugu, he withdrew at the last minute because people like Dr Chris Ngige, the Minister of Labour and Employment, convinced him that he needed to go to Igboland only when his administration had done something substantial for the people. This was to enable a process of reconciliation between him and the Igbo people to commence. But there is nothing tangible on the ground yet in the South East to warrant a presidential visit. Some people in the administration are now allowing political expediency to trump reason. The more painful aspect of the unfolding scenario is that they are succeeding in making the president’s personal integrity go up in smoke.

President Buhari need not join the tiny group of unprincipled politicians and hawks advocating that the APC conquer Anambra State by all means in the forthcoming election, so that the president could have a firm base to contest for reelection in 2019. The APC has 25 states, including the Federal Capital Territory, in its kitty. It has a wrong candidate in the upcoming Anambra election. President Buhari had better play the statesman and retain his integrity by ignoring political hawks and extremists who want to bring him down to their own level in the name of party solidarity.