Why we should also listen to Maina 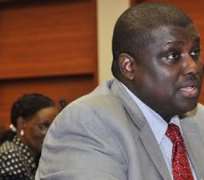 An article on Maina with a title such as the above is not likely to win its author any applause or friends. With Maina and ‘Mainagate’ becoming by-words for ‘fantastically corrupt’, to suggest that we should pause to listen to his own side of the story or raise questions about some gaps in the prevailing narratives isto invite retorts such as ‘corruption fighting back’ or ‘how much have you collected’?

In ‘normal’ societies, there will not have been a quick consensusthat someone not yet convicted by any court of law is ‘fantastically corrupt’ (as we are seeing in the Maina and other cases). But Nigeria is not a ‘normal’ society in many ways. Lack of trust in our justice system has led to the triumph of an alternative system – the court of public opinion- (also known as media trial) where the ‘judges’ are a motley combination of those angry with the system and those baying for the blood of their class, ethnic and regional enemies. In this alternative universe, the fear of self-appointed moral police sometimes means that people are afraid of giving voice to those who may need it. This is precisely what I hope to achieve with this piece - to point out the gaps in the prevailing stories about Maina and give voice to Maina’s side of the story (as reported by ThisDay of October 25, 2017). Maina may well be a thief but I feel strongly there is more to the story than simply embezzling public funds.

There are several things that do not add up in the Alhaji Abdulrasheed Maina saga. The following are some of the key issues in the stories and my own questions and concerns:

One, the report is that Alhaji Abdulrasheed Maina, a ‘mere’ Assistant Director in charge of Customs, Immigration and Prisons in the Federal Ministry of Interior within the Human Resources Department was appointed Chairman of Presidential Task Force on Pension Reforms under former President Jonathan. The key mandate of the task force was reportedly to sanitize public sector pension which was said to be enmeshed in acute corruption.After being sacked for fraud in 2013 and being on EFCC’s wanted list since 2015, he was brought back secretly, reinstated and given double promotion to the rank of Director with his salary arrears of over N20m paid to him.

My questions are: Why was Maina seen as the most competent to be given this assignment by the Jonathan government? Was there any outcry or grumbling that he was not suited for the task? Was Maina possibly seen as a goal-getter – despite any other character flaws he may have? If he was unqualified for the job, why was the Jonathan government protecting him? And why did the Buhari government bring him back secretly?

Two, Maina reportedly stole N2 billion belonging to pensioners. He was invited by both the Senate and House of Representative to come and defend himself but he refused to honour the invitations. The Senate subsequently issued a warrant for his arrest and he absconded from the country. In fact, former Senate President David Mark was quoted as saying:“He was all over the place, boasting about his connection to the Presidential Villa and kept on bluffing the Senate” and that to “ compound the issue, he was indeed seen driving in and out of Aso Rock in a convoy of vehicles with police escort. It was at a point when I couldn’t take the nonsense any longer that I decided on the letter to the President.” The Senate had to issue a threat before the president consented to Maina’s dismissal from the federal civil service in 2013. He was later declared wanted by the EFCC in 2015.

The Senate President also alleged that Maina drove two bullet-proof cars and “used N1billion Naira for jamboree abroad in the name of verification” and also spent “more than N8m every two weeks on personal security”. In his defence Maina claimed that he had earlier honoured the lawmakers’ invitation but was shocked by the treatment given to the pension thieves by the Senators. According to Maina, the “pension thieves were being given tea in the Senate Chambers while I and Lawode were inside the dock. So, the thieves were with the Senators.”

My questions: Why did it take the EFCC two years to declare Maina wanted after he was sacked? How come someone who enjoyed ready access to the villa became overnight a pariah such that he had to go into hiding? Is it true that the 7th Senate that invited him were actually shielding some of those who were stealing from the pension funds? What does Maina have to say about allegation of spending N1 billion in the name of verification aboard? And how much was he spending on his personal security and what was the source of the fund?

Three, the Premium Times of October 26 2017 reported that Maina’s family members confirmedthe online paper’s report that the State Security Service, helped Maina to return to the country and provided a safe house for him. There were also reportselsewhere that when he first fled to Saudi Arabia, he was constantly visiting the country under the protection of the DSS. Also although Buhari ordered his sack amid public outcry, he is yet to act ona report by the Head of Service on how he was secretly recalled back into the service, given double promotion and paid salary arrears of over N20m.In fact Premium Times claimed that between 2011 and 2013 (during the Goodluck Jonathan administration), the DSS paid about N152m into an account controlled by Maina.

My questions: Is it possible that Maina is an agent of the secret service doing some valuable work for the government – despite his alleged lifestyle? Why was there so much secrecy surrounding Maina’s reinstatement? Why was he given a double jump and reportedly paid huge salary arrears? What did Attorney General of the Federation Abubakar Malami mean when he said he recalled Maina in the “national interest”? Why is the SSS not speaking up on the matter?

Four, in his defence of the charges against him published in This Day of October 25, 2017 entitled: ‘Maina: Pension Thieves are after My Life for Exposing Fraud’, Maina explained that he went into hiding to save his life from pension thieves who vowed to silence him for plugging the loopholes in the pension payment regime. He also said he was ready to come out from hiding to defend himself if President Buhari would provide him adequate security. The former pension boss claimedthat former President Jonathan gave approval for a bulletproof car for him because of threats to his life.

Maina denied stealing pension money and said that his task force did not have or operate any account and challenged anyone with proof that he was given any government money to present the proof to Nigerians. He claimed that the task force he chaired was made up people from several agencies including the EFCC, DSS and ICPC and that any decision by the task force must be endorsed by all the agencies represented in the task force.

Maina challenged anyone who has ever given him money to speak up.

He claimed that instead of appropriating government’s money, his task force recovered N282 billion. He equally claimed that his team discovered that N300m was being withdrawn every morning from Police Pension Office; that while the government was allocating N1.5bn every month for police pension, the actual amount was N488 million ( meaning that over 1bn was being creamed off by someone or persons every month); that his team created e-payment and gave pensioners smart cards for self-verification; that his team found out that the payroll of the Head of Service was N5.12 billion when it should beN825 million, and that it got approval for 53 per cent increase in pension and used the money it recovered to pay for the increase. Maina also claimed that the information he gave unnamed security agencies helped them to recover N1.6 trillion. Elsewhere there was a report that the whistle Maina’s team blew led to the investigation,prosecution and conviction of John Yakubu Yusufu, then serving Assistant Director, who was alleged to have stolen over N2 billion belonging to Police pensioners.

My questions: If Maina’s claims are true, is it possible that he is up against powerful forces reminiscent to what we saw with those we called ‘subsidy thieves’ who fought back vigorously at attempts to plug the loopholes in the fuel subsidy regime under President Jonathan? Why are the people Maina mentioned by names not speaking up? If no one ever gave Maina money, what are the sources of the money he allegedly used in buying choice properties, including allegedly paying $2bn in cash for a property in Abuja?

For me, there iscertainly more to the Maina story than we are being told.