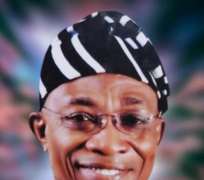 The National Institute for Policy and Strategic Studies (NIPSS), Kuru, Jos, has disclosed that Osun state has tourist centres that have the economic potentials to build the economy of the state and that of the country.

According to the institute, Osun has more than 12 internationally known tourist centres which should be used to build the economy of the state and that of the country in general.

The institute had sent a team to visit some major tourist centres in the state with a plan to develop a strategy framework for the transformation of the state into a top tourism destination in Africa.

Addressing a press conference on Tuesday after a two visit to some major Osun tourist centres, the leader of the team, Mr Asipita Umar, said: “We are here to form a corporation with the state government on ways and means to improve the torusim development situation on the natural occurring tourist attractions in the state.

“Osun state is blessed with more than a dozen world recognized tourist centres and sites, international known. But as it is, the state government has not taken the full advantage of the potentials in terms of economic activities, cultural promotion that the tourism sites in Osun state could offer.

“The National Institute for Policy and Strategic Studies is the apex Nigerian institution that concentrates on analyzing and looking at policy and strategy with relation to critical development issues in Nigeria. Tourism is the second largest contributor to global GDP and the second largest employer of labour worldwide.

“If Osun state has these potentials and we have not taken advantage of exploring it to highest possibilities, NIPSS feel like giving the current trend of diversifying the economy, we have to start looking at areas that have potentials for generating employment, foreign exchange earnings and many other things.

“Also, culture is a people, the more you can promote your culture gives you comparative advantage in term of interaction with other people of the world. Our purpose here is mainly explorative, after this we will sit down, have a discussion and come up with what we can do together to attract proper investment to develop these sites to world class places for tourist lovers.”

Umar said NIPSS would design a strategic policy framework for the Federal Government for the development of tourism in Osun and other part of the country.

In her address, a member of the team, Mrs Zandra Agbor, who is a Chief Consultant in the institute said: “What we have seen so far is quite interesting, if we did not come to this place, we would not know what Osun has on ground.

“It is an eye opener to us and I know that if proper investment is done, I am so sure this will open up Osun state and it will generate lots of revenue and serve as great potentials for the state.”

The Chairman, Osun Board of Tourism, Engineer Abimbola Daniyan, who took the team round some of the tourist centres in the state said: “This is our single largest opportunity for economic expansion and diversification of our revenue sources.

“These places give unpaid publicity for Nigeria and Osun state; go to anywhere on the net; you will find Olumirin waterfalls, Ayinkunugba waterfalls, Kiriji war sites and so many others. It is our duty to ride on the already mileage and build a big leverage out of it.

“We can do that by driving marketing in more systematic and promotional manner, improving the facilities to enhance the ecstatic value of these assets and providing support services and product which can turn this place to a destination in the proper sense.”

Daniyan commended Governor Rauf Aregbesola on his effort at promoting tourism in the state, saying that the governor’s plan for tourism development was halted by the paucity of fund.

In his remarks, a member of the team, Professor Sola Adeyanju said: “There are lots of sites in Osun that should actually be used to build the economy of the state and that of the country in general. Tourism is a sure way to boost and diversify our economy.”