Democrats win governor's races in Virginia, New Jersey in push back against Trump 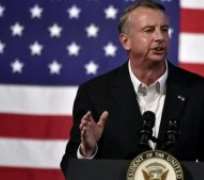 Democrats scored a pair of major gubernatorial victories Tuesday, based on ABC News’ analyses of the exit poll and vote, landing new governors in New Jersey and Virginia as the party attempted to showcase resilience one year after President Donald Trump ‘s surprise election victory.

The Virginia race, in particular, took on the air of a referendum on Trump throughout the campaign. The commonwealth’s status as a swing state in presidential years and the stark divide between its suburban northern region and rural Appalachian southwest turned it into a representative test case on the country’s response to the two major political parties a year after electing the former real estate mogul.

Though Trump had not personally campaigned for the Republican in Virginia, Northam's campaign attempted to tie the president to Gillespie, banking on Trump's unpopularity in the commonwealth to help secure the fourth gubernatorial victory for Democrats in the past five Virginia races. The Associated Press Virginia Democrat Ralph Northam points to his wife Pam as they celebrate his election victory with supporters at the Northam For Governor election night party at George Mason University in Fairfax, Va., Tuesday, Nov. 7, 2017. more +

“It was said that the eyes of the nation are now on the commonwealth,” said Northam in his victory speech Tuesday evening. “Today, Virginians have answered and have spoken.”

Northam continued by pledging to “put the people of Virginia before politics, before party and before ideology,” and by noting the increasing diversity of the U.S. and of the commonwealth. He said that his administration will endeavor to make Virginia as welcoming a place as possible.

“Our lights will be on, our doors will be open,” he said.

Trump reacted to the result in Virginia via Twitter from South Korea, where he is in the midst of a 13-day trip, writing that “Gillespie worked hard but did not embrace me or what I stand for.”

Trump's firebrand former chief strategist Steve Bannon — who had stumped for successful Alabama Republican primary candidate Roy Moore in September — offered to rally for Gillespie on multiple occasions but the campaign rejected his offer, according to two sources close to Bannon.

Breitbart, the ultra-conservative website that Bannon helped found, published stories supportive of Gillespie, which political observers saw as a sign of Bannon's interest in the campaign. But two sources close to Bannon said he was always skeptical of Gillespie's commitment to the Trump agenda which only started to play up in the final weeks of the campaign.

Bannon made it known that he was concerned about Gillespie's lack of energy and his close association with George W. Bush via his service as a White House adviser.

“Ed Gillespie had no coherent message, was inauthentic, spoke from both sides of his mouth and at the end of the day, even the deplorables couldn't save him,” Andy Surabian, former Trump White House staffer and political adviser to Bannon, told ABC News.

A Gillespie spokesperson did not immediately respond to a request for comment. In New Jersey, sweeping backlash to the deeply unpopular Gov. Chris Christie became the driving force behind Murphy’s election campaign. The former ambassador’s first run for elected office found him tying Christie to his lieutenant governor, Guadagno, but in his victory speech, he pledged that “the days of division are over.”

“Starting here, and starting with us, New Jersey is coming back,” Murphy said, before pledging to put together a diverse administration that reflects the population of the state.

“We will rebuild our state from the bottom up, and from the middle out,” he added.

The New Jersey election was dominated by talk of the governor, who is among the least popular in U.S. history, based on polls of his job approval. Murphy had argued that a Guadagno governorship would represent a continuation of Christie's tenure, while Guadagno pointed to moments of disagreement with her boss to attempt to distance herself from the two-term governor and former Republican presidential primary candidate.

Trump was notably quiet on the race in the traditionally blue state where Murphy led Guadagno by consistent double-digit margins in polls ranging back to the spring. Recent polls showed the Democrat with a lead of between 10 to 15 points.

Surveys of Virginia voters showed a markedly closer race, with Northam out-polling Gillespie by as many as 9 percentage points in one poll, while falling within the margin of error in another.