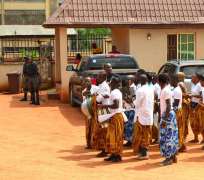 Hundreds of members of the Peoples Democratic Party (PDP) from Itsekiri, Warri South West local government area, Delta State have expressed their disapproval over the alleged imposition of a strange candidate, one Taiye Duke Tuoyo on them by an Ijaw man, Deacon in Christ Embassy and current Acting Governor of the state, Mr Kingsley Burutu Otuaro.

The aggrieved protesters, who stormed the PDP State Secretariat, marched through the dilapidated road leading to the party’s secretariat and besieged the arena in a carnival like mood with a cacophony of cultural troupes, women groups and a large number of vibrant youths.

In their protest songs and chants, they accused the Deputy Governor of seeing himself as a tin god, arrogating to himself, the power to install strangers on them which has disrupted the political harmony of the local government.

Speaking on behalf of the protesters from the Six Itsekiri Wards in the LGA, Mr. Andrew Igban said that, they vehemently rejected the imposition of Taiye Duke Tuoyo on the Itsekiri of Warri South West local government area as the PDP candidate for the forthcoming Chairmanship elections scheduled for January 6, 2018.

In a communiqué signed by Itsekiri Stakeholders in Warri South West - Pa John Edah, Chief Thomas Ereyitomi, Barr Daniel Mayuku, Rt. Hon. Prince Omatsone J.F.K, Hon. Oligida Samuel, Arubi Joe, Hon. Esigie Omamofe, Hon. Francis Otimeyin, Amb. Peter Odri, Christy Omamofe, Patience Wanikone, Hon. Golly Emmanuel Oritseweyinmi, Mrs. Roselyn Asin-Omagbemi and Andrew Omagbemi Igban which was presented to the PDP State Organizing Secretary, Chief Sunday Onoriode who received the Protesters on behalf of the State Party Chairman, Kingsley Esiso, the Warri South West PDP leaders submitted that, “With all humility and complete loyalty to the party but in great pains, we the Leaders, Stakeholders and the teeming members of the People's Democratic Party, PDP of Itsekiris ethnic extraction of Warri South West LGA, Delta State, namely Ugborodo ward 5, Akpakpa ward 6, Madangho ward 7, Orere Ward 8, Aja-daibo ward 9 and Ogidigben ward 10 are not pleased with the state leadership of the party in her role in trying to allow the imposition of a candidate on the people even after the state party executives and leaders have been duly notified that the chairmanship of the LGA has been zoned to Orere ward 8 for fairness, equity and stability of the party based on hitherto agreed internal rotational arrangement of the PDP by the Itsekiri party leaders of Ugborodo and Benin River axis.

“That we the PDP leaders of Itsekiri extraction of Warri South West LGA wish to inform the state leadership of the party and the state governor that the Ugborodo axis and the Ijaws have taken their turn of the LGA chairmanship in the persons of Hon. David Tonwe ( presently the Director-General, Delta State Security) and Hon. George Ekpemupolo (the immediate past chairman of the LGA) and that it is now the turn of Benin River (Orere) axis to nominate the Chairmanship candidate for the forthcoming contest.

“With every sense of seriousness, we have in one voice rejected the candidature of Taiye Duke Tuoyo as he is not even from Warri South West but Warri North and have not been playing politics with the ITSEKIRIS in Warri South West local government area.

“That the Delta State Governor and the state leadership of the party should respect the choice of the Leaders and all stakeholders of both Orere ward 8 and the entire Itsekiri leaders of Warri South West as contained in the dual communiqué dated October 16th 2017 and October 21st 2017 which were published in Vanguard Newspapers on page 30 of Wednesday 25th October 2017 which was presented to the party.

“That we hereby request the state party chairman to direct the immediately release of party nomination form to Mr. Johnbull Atse Edema Atumu who remains the sole candidate adopted by the Leaders and stakeholders of Orere ward 8 as well as all the Itsekiri PDP leaders of Warri South West LGA for the forthcoming LGA elections scheduled for January 6th 2018.

“That the party should not sacrifice party loyalty of the people of Warri South West to please the inordinate interest of few individuals as this will have dire consequences on the party in future elections while reminding the party leadership and the state Governor that we need to build bridges that will take PDP to a successful outing in the 2019 general elections and beyond.

“That we have collectively resolved to take all necessary means within the ambit of the law to protect our franchise and resist the imposition of any candidate on us, even as we remind the Delta State Leadership of the PDP led by Barr. Kingsley Esiso and the state Governor, H.E Senator Dr. Ifeanyi Okowa that politics of sustainable success is about seeking the opinion of the people and democracy is a fundamental human right which gives the people the right for everyone to express his/her feelings regarding those to assume leadership position and that on that note the people of Orere ward 8 and Warri south West LGA in general have spoken.

“That the leaders, stakeholders and the entire people of Warri South West LGA have endorsed Mr. Johnbull Atse Edema Atumu as the sole candidate of the PDP for the forthcoming local government elections and this is in consonance with the Latin word which says “Vox Populi, Vox Dei” meaning “the voice of the people is the voice of God”.

“We hereby call on the Delta state Governor, H.E (Senator) Dr. Ifeanyi Okowa and the state leadership of the People’s Democratic Party (PDP) led by Barr. Kingsley Esiso to give the necessary backing to the candidate of the people in the interest of the party to avoid unpleasant consequences for the people in line with the saying that “a stitch in time saves nine”.

Receiving the party faithful, the Organizing Secretary of the Party, Chief Onoriode while commending them for a peaceful exercise, assured them that their demand would be communicated to the State Chairman and leaders of the Party for further consideration.

Contacted, the Senior Special Assistant to the Acting Governor, Bulou Kosin, said he has not been mandated to speak on the matter as his boss is currently out of town.