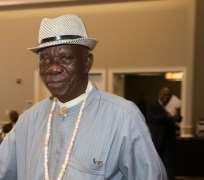 The passing away of Chief Hyacinth Aemecheta Ugwu was the most devastating news that my family and I have come to bear for a long time.Chief Ugwu was a part of my family for the past 35years.He was an excellentfriend,a mentor, and a remarkable companion for all occasions.

His wise counsel, practical solutions to day to day life issues, both personal and business, would always remain a treasure for all of us who knew him very well. Above all, he was neither a man for dogma nor cant, but instead saw both sides of all issues with anopen mind and brilliant insights.

Chief Ugwu, as many of his friends know him, touched many lives and in many different ways.I was privileged to have met Chief Ugwu in 1980 when I was in charge of the Vitamins & Minerals Division of Roche Nigeria Ltd. Instantly, I noticed that his unassuming demeanour puts anyone at ease. You could say that he reduced the temperature of his immediate environment to allow for a productive conversation. His simplicity and good organisationalbehaviour were worthy of emulation for anyone willing to learn. Moreover, I believe he found me an outstanding student and indeed became my mentor, as my career in Roche Nigeria Ltd blossomed from a Manager to a Director in 1984.

When I left Roche in 1991,his support was invaluable during my transition from ex-director of a multinational to a self-employedentrepreneur. Indeed, my company, Bioorganics Nutrients Systems Ltd, started officially at his office at Alausa in 1991.

Chief Ugwu was indeed a great man, and like all great men,one had to understand the contradictions of his worldview.As the computer age emerged in the early 80’s,Chief Ugwu immersed himself in the practical application of information technology, and I believe until he passed away last month he was using his iPad actively. From a literati, he transformed effortlessly to a digiterati and could discuss any current topic with lucidity. He was the Renaissance Man, at home with the sciences as with the arts.

As an optimist, he had a passion for getting things done and became a great builder, both for his home and for his business. As a diplomat, he made friends quickly and ensured he sustained the friendship. This attitude helped him so much at the golf course,where he achieved an eight handicap within nine months.

He was indeed an epitome of the abundance mentality principleas explained by Stephen Coveyin his book, The Seven Habits of Highly Effective People. He was ageless, and until he passed away, I could not place him above 75 yrs, though he clocked 86.

He was a well-known personality in Agidingbi, at home with the indigenes as with others as the small community expanded over the years. He brought me into that town where I built my first house and lived for many years.

The word empathy could be his middle name as he deplored misery and wanted the best for all. He used his language skills (versed in French and other foreign languages) to good effect for Nigeria, Biafra and back to Nigeria, negotiating safe passage for Biafran refugees to Zambia and Gabon. He worked with Nnamdi Azikiwe, Col Odimegwu Ojukwu, Emperor Haile Sellasie and Kofi Annan, among others.

As a nobleman, he lived to the real virtue of nobility and shone like a star amongst his colleagues and friends. Moreover, he passed on this great attribute to his immediate family, and all the children have done exceptionally well in their various fields of human endeavour. It may be challenging to wish Chief Ugwu a goodbye because friends like him cannot die as his words and deeds would remain evergreen in our hearts.

Hyacinth Aemecheta Ugwu was the Uzzi Omeaku 1 of his hometown, Amuzi, Obowo, in Imo State, Nigeria. He also held a chieftaincy title from the people of Agidingbi, Ikeja where he built his home and lived for about 40 years. Born on September 9, 1931, Chief Ugwu departed this plane on September 20, 2017. His remains will be interred on Friday, November November 10, 2017.

He lived life to the full. From the St Brigid’s Primary School, Nnaramba, Ahiara, Ahiazu Mbaise LGA, he schooled at Christ the King College, Onitsha, leaving in 1949. He then went to the University of Legon, Accra, Ghana where he studied Economics and Geography, graduating in 1958. He entered the diplomatic corps first as a graduate student of the Ministry of External Affairs, 1960-1963. He would later serve Nigeria as a diplomat for ten years. Post-service, this global citizen first worked and lived in Zambia for four years before returning to Nigeria. He ran his Chiss Limited which transformed intoChissIndustries and Chiss Inks. He engaged in the supply of industrial chemicals for water treatment to food manufacture, to the supply of ground rice and the production of printing inks.

My wife, I and our children share with them the pain of this loss. We pray that the good Angels of the Lord keep him safe and happy forever.