Ethiopian Airlines lands B787-9 in Abuja on Tuesday 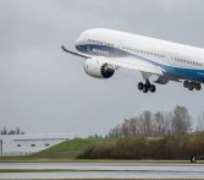 Ethiopian Airlines, Africa's largest airline group, has announced that it would bring its newest Boeing 787-9 plane tagged the “Big Brother“ to Abuja on Tuesday.

A statement by the Media Consultant, Mr Chukwuemeka Chigozie, on Monday, said the B787-9 was part of its commitment to deliver exceptional service to African market by operating the latest technologically advanced aircraft in the market.

The airline said that passengers had enjoyed the unique on board features of this latest technology aircraft like the biggest windows in the sky, high ceiling, less noise, distinctive lighting, and higher air humidity.

According to him, Ethiopian Airlines has always services Abuja with its newest Aircraft.

“It brought the Dreamliner B787 to Abuja in 2012 and reopened the Abuja Airport this year with the A350 when the Airport was reopened after 6 weeks closure.

“Ethiopian Airlines has been operating into Nigeria since 1960 and currently flies to 5 cities in Nigeria and it was the only international Airline that flew to Kaduna when Abuja Airport was shut for repairs.

“Ethiopian becomes the first carrier in Africa to operate the 787-9 and extends a tradition of setting aviation milestones,'' he said.

The 787 Dreamliner was the most innovative and efficient airplane family flying today, and more than 600 Dreamliners had entered commercial services since 2011.

According to him, Dreamliner has been flying almost 200 million people on more than 560 unique routes around the world, saving an estimated 19 billion pounds of fuel.

“This comes as ET announced that it will add a 6th weekly service to and from Yaoundé & Libreville effective November 3,'' he was quoted in the statement. (NAN)