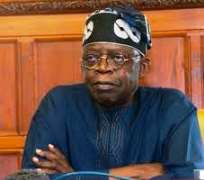 A social cultural and political organization, Oranmiyan group, has condoled with a Chieftain of the All Progressive Congress (APC), Asiwaju Bola Ahmed Tinubu, over the death of his son, Barrister Jide Tinubu .

This is contained in a release signed by Olajide Sodiq and made available to journalists in Osogbo on Saturday. The group described the incident as shocking and saddening.

The group, said that the death of the deceased Barr Jide Tinubu was a great lost to his bereaved parents, All progressive Congress (APC) and the nation at large.

Describing the deceased as a "wonderful soul", the group said "Jide has been a source of joy to his our leader Senator Bola Ahmed Tinubu, therefore we are appealing to Asiwaju Tinubu to see his death as a test from from Allah.

"We received with rude shock the news about the death of first son of our Principal, the National leader of the ruling APC, Senator Bola Ahmed Tinubu, Barr Jide Tinubu.

"We the entire members of Oranmiyan group shared in your moment of grief just as we implore the family to take heart and pray such an incident does not repeat itself. May the soul of the deceased rest in peace. "

The group implored Tinubu to take heart and accept the incident as the will of Allah who gives and take.

The group, further expressed its condolences to the immediate and extended family of Asiwaju Bola Tinubu and friends of the family for the great loss.

It would be recalled that the deceased, Jide Tinubu was a practicing lawyer before his death.