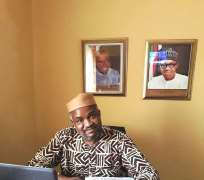 Hameed Ali, is a retired colonel of the Nigerian Army and was at a time the military governor of Kaduna State.

He can be said to be a very experienced Nigerian.

For nearly two years since his bosom friend Muhammadu Buhari, a retired Major General and former military head of State, became the democratically elected and inaugurated president of Nigeria, Colonel Hameed Ali (rtd) has presided over one of the most influential and juicy political offices as the comptroller General of the Nigeria customs.

The Nigerian Customs Service should be considered as about number three largest revenue earner for the Nigerian state outside of crude oil and Agriculture.

This very powerful member of President Muhammadu Buhari’s kitchen cabinet has just made an explosive remark to the effect that the current administration in which he is a pivotal member has derailed.

The sum total of the words of the true confession expressed by this controversial ex-soldier is to the effect that the president Buhari’s government has not faithfully implemented the agenda and ideology which the team used to convince majority of the voters totaling fifteen million to elect this government into public office for a term of four years.

Apparently, this former combatant was afraid that the majority of Nigerians will likely 'stone' them should they not keep to their terms of contesting and winning the hotly contested poll. By the way, the former PDP governor of Rivers State Mr. Rotimi Chibuike Amaechi who was pivotal to the formation of the then newly merged All Progressives Congress had told Nigerians to stone the federal officials if the current administration fails to deliver on her solemn electoral pledges. So, the verdict by Colonel Hameed Ali coming at the second half of this government may have set tongues wagging whether this isn't an invitation for the public stoning of the failed public officials.

We will quote the exact words used by Colonel Hameed Ali to convey a much more details of what he has just told Nigerians in black and white.

Hear him: “Let me say here without fear of being contradicted that I think half way through the journey, we are losing our core values. We are losing our vision and mission and I think that the idea of our being here today is to look critically at what we need to do to get back on track."

“There is no doubt that we have derailed because we are not doing what we say we want to do. Why is it so? We need to find an answer to that. If we do not find answer, then what should we do to get us all back on track? We owe this great nation and the 180 million Nigerians the duty to give good governance, good governance is what they voted for and good governance is what they expect and deserve. We therefore as Buhari Support Organizations, have a great task ahead of us. Our battle starts now.”

Hameed Ali’s alarm bell which rang to symbolize the near absolute loss of confidence in the ability of the two year old administration to deliver the objectives for which it was elected, was coming almost a year after the wife of the president Mrs. Aisha Buhari protested vehemently that a certain cabal within the presidency has hijacked the administration.

Soon after, the then holder of the office of secretary to the government of the Federation and a key member of president Buhari’s kitchen cabinet and a member of the so called cabal which Aisha spoke about, was suspended from office over allegations of theft of over N300 million from the North East development fund.

The suspension meant that his office was then occupied on temporary basis by a career permanent secretary in the person of Dr. Habibat Lawal.

She acted as secretary to the government of the federation for nearly a year.

This Acting secretary to the government of the Federation could not have exercised her duties and functions in such a way that a substantive secretary of the Federal administration could have done basically because as a serving civil servant in the position of a permanent secretary, key members of the All progressive Congress viewed her as someone who has sat on a very strategic position that ought to be occupied by a politician.

Basically, Dr. Lawal who took over in acting capacity from the other Lawal implicated in an alleged financial scam, operated quietly from the background even as so much of the duties and functions that millions of Nigerians looked up to the Federal government to implement were on autopilot. This wasn't helped by the 103 days medical leave of President Muhammadu Buhari which he spent in the United Kingdom.

This is however not to say that the Acting secretary to the government at the center was totally inactive but it would seem that most Nigerians who are at the receiving end of the slow pace of governance immediately pointed to that office as one of the fundamental reasons why the affairs of governance have taken the back bench and in its place what millions of Nigerians kept reading on the pages of newspapers and hearing/seeing on electronic media were some unproductive and malicious verbal exchanges between the spokesmen and women of the presidency and some key opposition politicians.

Although the nearly one year and some fractions of months that the then suspended SGF spent in office was also dull, inactive, and totally lacking in substance, Nigerians in their millions became disillusioned when they waited for two years for the federal government to ensure that the collapsing sectors of the economy are revamped without ever witnessing any major turnaround, then they began expressing loud doubts that the government at the center was incapable of achieving meaningful impacts in reviving the educational, health, road networks and power sectors that have virtually collapsed.

It was therefore heartwarming that a top insider such as Colonel Hameed Ali could no longer keep silent to such an extent that he voiced his feelings out even though he missed the mark when he wrongly transferred his indignation and anger to a wrong place.

Ali could have simply ended his blame game by recognizing that responsibility for either success or failure of the administration resides squarely with the president.

Well, President Buhari, seems to have woken up from a very long period of inaction on the pending matter of alleged fraud involving his then suspended Secretary Mr. Babachir Lawal when he dusted up the recommendations of the investigative panel led by his vice president professor Yemi Osinbanjo (SAN) to dismiss Mr. Babachir Lawal and the second top official who before his latest dismissal was the Director General of the National Intelligence Agency Mr. Ayodele Oke.

He was implicated in the discovery of humongous amount somewhere in a residential area of Lagos running into several millions of foreign denominated currencies which he claimed to belong to his office.

In what seemed like a direct response to the loud protests from across board that his government is not working, president Buhari has just recruited a very senior lawyer and someone identified as a veteran of board room politics Mr. Boss Gida Mustapha to take charge of the high office of the secretary to the government of the Federation.

Boss Mustapha has come to his new office with the frame of mind of someone who is not a novice in politics and so the general expectations of the people is that the middle aged lawyer would bring his vast experiences to bear in trying to restart the dead engine of governance at the center in Nigeria.

This boss who has been told by his boss to resume office with immediate effect should hit the ground running and spend no valuable time on political frivolities.

The Adamawa state born – cousin of the dismissed erstwhile SGF must deliver professionally thorough and dedicated services to the oppressed people of Nigeria who have suffered years of mis-governance.

As the man who should assist his leader the president of Nigeria to practically deliver the dividends of democracy, he must have it at the back of his mind that he is coming into office at a time that two years have gone out of only four years of the administration without much developmental impacts. He has no time for congratulatory messages from contractors and he needs to operate a very lean office made up of core technocrats and bureaucrats who would provide the technical knowhow for him to reengineer the broken down governmental engine back to speed.

The new secretary to the government of the Federation should play less of politics and offer top flight and qualitative services to the people of Nigeria within a limited time frame so Nigerians would begin to have fresh breath of good governance.

There are too many government agencies that are headed by persons in acting capacities and those critical agencies have no governing boards, the new scribe of federal government must within few weeks bring this governmental lethargy and inertia to an end by ensuring that the agencies are headed by tested and trusted technocrats and that the bureaucracy of government works optimally.

One of the key agencies that the Federal government must make hay whilst the sun shines in reconstituting the governing board is the National Human Rights Commission.

The National Human Rights Commission has been without a board since over a year. That agency is an institution for persons with the expertise, the zeal and passion to surmount tge near insurmountable human right challenges confronting Nigerians on daily basis. The Human Rights commission is not a place to give jobs to political loyalists.

The assumption of office of a senior lawyer connected with the human rights institute of the Nigerian Bar Association should motivate the new boss at the office of the secretary to the government of the Federation to provide compelling reasons for the immediate reconstitution of the board and many other critical boards. He must be aware that his main boss President Muhammadu Buhari has poor antecedent on issues of respect for human rights of Nigerians.

Boss Mustapha should also find ways and means to implement all the necessary recommendations on how to cut down on the cost of running government.

This writer would also like the new chief scribe of president Buhari’s administration to use his nearness to the president to ensure that president Buhari becomes truly the president of all Nigerians so the perception that he favours the North is eliminated. Let him read the beautiful book written by Dr Tunji Abayomi titled: "Constitutional powers and duties of the President" so this government can navigate away from the widely help perception that President Muhammadu Buhari in words and actions favours the core Moslem North.

"The effect of the provision is that negative votes against the President are recognized and validated as necessary by the Decree in the election of the President and are thus protected, any prejudice or penalty against them will clearly be inconsistent with the exercise of executive powers of the Federation", says Dr. Abayomi.

This legal luminary offered scholarly words of wisdom thus: "It is not just that the nation is recognized as one constituency for the election of the President under Section 132(4), but the President’s responsibility to all the members of that constituency is by the provision of the section not only inherent, but also required."

If Boss Gida Mustapha can achieve these noble goals then he will enter the national hall of fame as a tested and trusted administrator. He already knows that allegations of corruption and greed are the two banana peels that swept off his predecessor so he must set his mind towards doing only those duties which will preserve his good name.