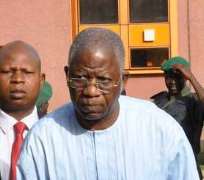 The case of a N2 billion fraud brought against Stephen Oronsaye, a former Head of Service, HoS to the Federation, by the Economic and Financial Crimes Commission, EFCC, before Justice Gabriel Kolawole of a Federal High Court, Abuja, has been adjourned to November 14, 2017 for “further hearing of evidence of the first prosecution witness”.

Oronsaye is alleged to be complicit in several contract awards during his tenure as HoS, and is standing trial along with Osarenkhoe Afe, managing director, Fredrick Hamilton Global Services Limited.

The witness, Roukayya Ibrahim, an EFCC operative and member of the anti-graft agency’s Pension Fraud team was away to Botswana for a short course and so was absent at today’s proceeding.

The prosecution, led by O.A. Atolagbe, had sent a letter to the court informing of the absence of Ibrahim, requesting for a new date. Copies of said letter were also sent to counsel for the defence.

“My lord, the witness will also not be available by the 7th of November as the course she went for in Botswana has been extended for two weeks,” he said, urging the court for a later date.

Counsel for Oronsaye, Ade Okeaya-Inneh, SAN, and Oluwole Aladedoye, counsel for Afe and Fredrick Hamilton Global Services Limited, did not raise any objections.

Earlier in the course of proceeding, Aladedoye had brought the attention of the court to reports in The Nation and Sunday Telegraphnewspapers, dated October 29, 2017, titled, "Maina: 2 HoS named in N17b pension scam", and “How Maina, Oronsaye looted N14bn pension fund –Investigations”.

“My lord, the reports amount to media trial of the defendants,” Aladedoye said. “We seek your lordship’s protection by way of an order restraining the EFCC from interfering in this case by way of media of calumny,”he added.

Atolagbe, however, told the court that he was seeing the publications for the first time, stressing that since the trial began in July 2015, “there has never been an issue with reporting of proceedings in court”.

Justice Kolawole, who noted that he was also seeing the reports for the first time, however, stressed that: “I won’t make any order until I have read through the reports myself, and will give my decision at the next adjourned date.”